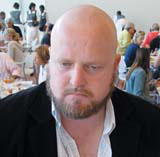 After slicing off his foreskin, moving from art to design seemed a natural progression for South African Peet Pienaar. Tomas Roope catches up with the larger-than-life character in Cape Town

Peet Pienaar is one of the most exciting designers I have ever met. He has been able to distil the vivid eclecticism of contemporary South African life into work that transcends local tastes, yet maintains an unmistakable and fresh African flavour. His special blend of magic dust has been sought out by a cross section of clients and agencies around the world, after Daddy Buy Me a Pony – the company he runs with business partner Heidi Chisholm – came to the rather geographically blinkered international design community’s attention, following golds in both the Clios and One Show for its Afro Magazine in 2004.

Tomas Roope: You have moved from being an established artist to a designer – almost a counter-intuitive direction. Why?

Peet Pienaar: I really got bored with art and wanted to move into something that I felt had more impact and has more of a purpose than ‘your own individual world’. Design really made sense at the time and it felt very natural to me.

TR: What are the real differences between these two areas?

PP: Well, for me, design is not so up-it’s-own-ass as art is at the moment, but I suppose it can be. You must also remember that I’m in a very different context – South Africa – where it really feels like throwing hungry people cake, when you spend any money on a work of art.

Every time I walk into a gallery or art museum and see a badly made video art work, it feels to me as if the artist has never seen TV before. I’m really sorry, but I’m not keeping quiet any more about the art world. As for sound installations, I hate it when I walk into a gallery and the only thing the artwork does is to make me feel stupid, because I have no clue what is going on, even if I dare to ask what is going on.

TR: Can you chart your transition from artist to designer?

PP: My last major art work was when I got circumcised, as an art project, and sold my foreskin. There was a huge fuss in South Africa – some cultures felt I was making fun of religion, tradition and so on, which were not part of my background. Afterwards, I thought, ‘So what? Here I sit with a cut penis, people are upset and what next?’ I wanted to do something that would reach loads of people and make people fall in love with me. I sold an artwork, bought an Apple Macintosh, learned freehand, and started Daddy Buy Me a Pony with Heidi. I really knew nothing about design. 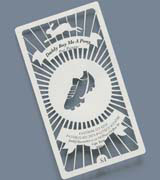 I realised there are only a few rules that make sense to me. First, whatever you do, make sure it’s fresh and you have never seen it before. Second, the more you work on it, the better it gets. The art background did help me to be aware of subtext in design and what you are communicating on all sorts of levels, and that design is also an expression of identity.

TR: How does being in South Africa affect your work?

PP: I study design that is made unconsciously here, like the local soccer fans and the way they express themselves. I look at humour and how western elements get new meanings in an African context – like Coca-Cola, on a sign here, means it’s a shop and not a drink.

TR: What are the pros and cons of being based in South Africa?

PP: The most exciting thing is that I live in a country where there are endless possibilities and that is part of Africa – the only ‘unknown’ left in the world. I also think the lifestyle here is just unbelievable.

The biggest con used to be that we were disconnected from the rest of the world, but that has changed. A lot of great people are constantly moving through. It would have been great if I could have been black.

TR: And the future?

PP: I’m about to bring out a commercial magazine for Africa. The closest I can think of is a mix between Face and Vogue for Africa – basically the coolest stuff around.