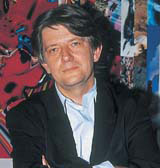 Deyan Sudjic signed a contract on Monday to become the next director of the Design Museum.

Sudjic (pictured) will leave his job as Dean to the Faculty of Art, Design and Architecture at Kingston University at the end of the academic year, to take on one of design’s most high-profile positions.

On 1 September, he will formally join the Design Museum. In the meantime, he will work closely with interim advisor Suzanna Tavern one day a week, as the museum embarks on its £50m expansion and relocation programme.

Sudjic says he will also relinquish his professional ties with The Observer, though he hopes to maintain links with Kingston University.

The decision to accept the job was a difficult one, he explains, having only been at Kingston since last July. But, he says, ‘This is a huge job and the sort of opportunity that only comes along once in a lifetime.’

‘This is a chance to redefine what we think of as a Design Museum, to explore new approaches and to evolve things beyond the Modernist ideal,’ says Sudjic.

‘In Deyan,’ says Design Museum chairman Luqman Arnold, ‘we have found a director who is not only very respected within the design world, but someone with huge experience as a curator, who has excellent links to education and has a proven ability as a fundraiser. We don’t even need to mention his work as a writer and journalist because that speaks for itself.’

His appointment comes as the museum’s trustees enter into protracted discussions with the Tate Modern to relocate to Bankside as a sister venue dedicated to design. Such an arrangement could put London on the map as the most important showcase for design in the world. It would not only trump its only serious rival, the Museum of Modern Art in New York – which has a floor dedicated to design – but it would create a demographic relationship with the gallery of mutual benefit to both venues.

Sudjic says the venture with Tate Modern is ‘our preferred option’ and that the time is right for the move, now that the museum needs a space for a permanent collection.

‘We are in negotiations with the Tate,’ confirms Arnold. ‘These are likely to take months, but we would hope to be in a position to announce more concrete plans before the end of the year.’

WHAT NEXT FOR THE NATIONAL DESIGN CENTRE?

• Dec 2005 – Gordon Brown gives the green light for a national design ‘hub’ based in London in his Pre-Budget Report. A question mark over funding remains