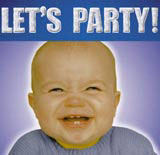 Emperor has created a visual identity and website to support a National Childbirth Trust campaign which aims to encourage parents and parents-to-be to attend fundraising events, or stage their own, in an effort to raise money for the NCT.

The events, called NCTea Parties, will be held nationwide in May, June and July and the consultancy has also created stationery, an information pack, posters and direct marketing material for the campaign.

The campaign has been developed by promotional marketing consultancy Rockhopper, who commissioned the design.

Rockhopper director Phil Bird says, ‘We were looking for a fun, endearing design that would grab the target audience’s attention and command a strong call to action.’

The consultancy, which was appointed in March, won the work via a credentials pitch.

Tetley is the lead corporate sponsor of NCTea Party campaign and is using the opportunity to generate awareness of its Decaf and Organic tea varieties.