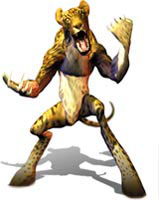 The inclusion of the latter may have bemused some, but the game design guru, credited with turning 2D arcade-style games into the complex 3D narratives of today, has been telling stories in digital media for longer than most.

So while Figgis told witty anecdotes peppered with ‘fucks’ and Armstrong wowed the audience with a demonstration of what seems an impressive and laudable venture (check it out at www.oneworld.net/tv), Molyneux, an outsider at an event aimed at television and film folk, painted the future of computer games.

Games, he said, need more contemporary storytelling, even greater interactive narrative and more movie-like qualities. In other words, they need to be more about design and creative issues than even new technology.

It would be harder to imagine a more thoughtful, committed and influential figure in game design than Molyneux, a son of toy shop owners who got into game design when the nearest thing to it was computer science, Molyneux’s BSc from Southampton University.

Chosen to open the exhibition at London’s Barbican, Game On: The Culture and History of Video-games, which kicks off tomorrow [Thursday], Molyneux’s portfolio includes some of the world’s top selling PC games: Populous, Theme Park and Dungeon Keeper, to name a few.

Many of these introduced ideas and concepts that were unimaginable by other developers and often viewed with naked suspicion by publishers before being enthusiastically adopted by all of them once the rave reviews and fantastic sales figures began to pour in. So where did Molyneux’s idiosyncracy and inventiveness originate?

His influences are the same as those cited by most creatives in his industry: the ability to recreate the simplicity inherent in the gameplay of early childhood. To that end, he devours science fiction books by the likes of Isaac Asimov and films by directors such as Tim Burton and Steven Spielberg – the latter, interestingly, both complimented for their ability to convey authentically childlike qualities in their work.

Creating a mood is high on his agenda. ‘What inspires me most is the feeling I get when I watch films, read books or listen to music. It’s not so much what I see on screen, but the mood they evoke in me,’ explains Molyneux.

It was while at Bullfrog that Molyneux is credited with creating real-time strategy games: graphicsrather than text-based games in which players influence, rather than just play, the game. The first proponent of this was 1988 war strategy game Populous.

Graphics-led games such as this were a breakthrough for designers, but were often, particularly with crude early programs, considerably less spectacular.

‘With text games you were free to use your own imagination to create the environments in which the game was set and the look of the characters you met,’ he says. ‘Once games started to use graphics, the rudimentary nature of the first home computers meant graphics could never live up to what the imagination had created,’ he adds.

But any minor failings in Populous’ graphics were compensated for by its originality of thought. Instead of the then-popular turn-based game, Molyneux opted to create a real-time war e e game that became the first ‘God sim’, in which the player is a deity influencing the lives of his minions. This type of game rapidly became Molyneux’s trademark: a player viewing his tiny world and its citizens as though from afar.

Populous became an instant success, as did follow-ups Syndicate, Theme Park, Magic Carpet and Dungeon Keeper. All shared the game’s common concept of the player as a powerful manipulator of behaviour and outcomes and designed to build ever-more complex interpersonal relationships and scenarios. So we got opinionated, sarcastic troops in Powermonger, harassed dungeon business management in Dungeon Keeper and labour disputes in Theme Park, Bullfrog’s most successful European title.

But all was not well at Bullfrog, which was bought by US games giant Electronic Arts in 1995. Disillusioned by the ratio of management meetings to creative inventiveness, Molyneux resigned in 1997 and set up Lionhead Studios, a back-to-basics games developer that focuses on one game at a time.

Its first game, released last year, was Black & White, a real-time strategy ‘God sim’ that takes the best of all Molyneux’s previous output and shapes it into a brilliant game with outstanding graphics – a benefit of increasingly sophisticated software. ‘Now, with developments in technology and the power of the next generation consoles and PCs, we are finally reaching a point where graphics might be as good as those that I imagined years back,’ enthuses Molyneux.

Might the current vogue for ever more realistic graphics, however, mean games become too uniform? Molyneux thinks not. ‘As we start to see movie-quality visuals in games, we’ll see developers experimenting with different visual styles to differentiate their work,’ he says. ‘I think you’ll see more stylised and abstract graphical styles in future games,’ he says. ‘The kind of abstract quality already existing in games like Rez, Jet Set Radio and Parappa The Rappa.’

He sees even greater benefits emerging for game designers as the focus shifts from technology: ‘Game design is becoming less about technology and more about design – just as in other creative industries style has become vital.

‘Increasing realism means games are becoming an area that will start to incorporate more creative disciplines such as scriptwriting, camerawork and directing,’ he says. And designers can experiment with avatars – virtual representations of the player – which could even change to reflect the way people play games, he adds.

But isn’t he worried about such levels of complexity getting in the way of gameplay? Conscious of it, yes. Worried, no.

‘Simplicity is key, and much harder to achieve than complexity. Above all, games that are easy to play and good to look at will succeed,’ Molyneux says. His next game will be his first for a console. I’d bet a small virtual world on it being as complexly simple as they come. m

Game On runs at the Barbican from 16 May-15 September. Details at www.gameonweb.co.uk