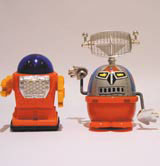 Robots have long been a source of inspiration to writers of fiction, pioneers of science technology, film-makers and small boys. Less well documented perhaps is the imaginative hold they exert over some of our leading designers.

The Design Museum, always keen to illuminate and elucidate, is drawing our attention to the vintage toy robot and spaceship collection of none other than fashion designer Sir Paul Smith.

Like many creatives, Smith finds it helpful to surround himself with objets and paraphernalia, partly for inspirational purposes, partly as a form of security. Indeed, his stores are littered with some of his fancier pieces.

Apparently, he enjoys nothing more on his travels than scouring junk shops and flea markets for trinkets to add to his collection, the older and quirkier the better.

Clearly originality and amusement and not street value are the criteria for Smith’s extensive collection. We’re not talking big, shiny Star Wars merchandise here, but rather the Cadbury’s Smash ‘Martian’ from the 1970s that was given away with packets of instant mashed potato, or an even stranger looking domestic robot, clutching some form of sweeper, another promotional giveaway perhaps.

There are wind-up robots, a robot alarm clock, a gigantic motorised rubber Godzilla and a robot that boasts (on the box) ‘completely see-through gear action’.

Of the spaceships, my five-year-old, Thunderbirds-crazy son would probably kill for the whizzy-looking tin rocket racer, made in China, boasting the curious sales pitch ‘friction with siren’.

Toy robots first emerged after World War II when Germany and Japan invested the financial aid given them by the US to increase manufacturing capacity.

The toy industry was a priority for expansion, especially in Japan. Inspired by the burgeoning craze for science fiction, manufacturers developed tin toys modelled on characters and props in comic strips, such as Flash Gordon and Buck Rogers, and cult films such as The Forbidden Planet (1956).

The first ones were made in the 1940s from recycled tin. By the 1950s manufacturers had become more inventive by developing battery-powered toys and using lithographic printing techniques to decorate the robots in finer detail.

In more recent times, the Star Wars films and The Terminator have introduced a worldwide audience to the aggressive capabilities of robots, while the progress of automation in the real worlds of commerce and medical science has yielded far more positive and beneficial results.

The fruits of Smith’s light-hearted hobby are nothing more than a bit of light relief amid the more serious exhibitions at the Design Museum. But, given the huge interest and recent developments in robotics – there have been myriads of TV programmes, books and magazines devoted to automation of one sort or another – perhaps a more extensive and considered exhibition on the subject wouldn’t go amiss.