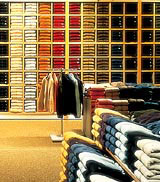 However tough the going gets, it seems the British will always go shopping. High street spending has helped keep the economy afloat over the past few years and last month’s retail sales figures revealed 70 per cent of companies reporting an increase in takings, with clothing among the strong performers (source: CBI).

Consumer expectations about the quality of store design have been raised across the board. Even value retailers are getting in on the act. Research published last week by Verdict suggests the likes of Matalan, New Look and Primark owe their success in no small part to their investment in design. And Conran & Partners’ work for Japanese entrant Uniqlo shows how the pile-it-high approach can be taken further upmarket (DW 27 September 2001).

Verdict senior analyst Sally Bain says, ‘The term discount doesn’t apply any longer. The leading value retailers have reinvented their decor over the past five years. Low price alone is not enough, there has to be styling and service.’

Many value retailers have taken on the characteristics of their mid-market rivals in terms of shop-fitting and brand development, says Bain. New Look has Brinkworth on its roster and Dalziel & Pow has worked with the retailer in the past and is now actively involved with Primark.

Checkland Kindleysides managing director Jeff Kindleysides believes this focus on design has helped to change consumer perceptions. ‘There’s no real stigma any more. In fact, it’s quite the opposite. Smart consumers are now picking from all parts of the market,’ he says.

Blass managing director Clive Blass also thinks value retailers have a positive story to sell. ‘The poor relation image has been designed-out. [Value retailers] are good at learning lessons because their margins are tight and they’re more scientific [about sales].

‘Their stores now exceed consumer expectations. There’s little clutter and the visual merchandising is well thought out [in terms of] colour and clarity,’ he says.

Of course, the majority of retailers use store environments to help build brands. Din Associates creative director John Harvey sees different nuances depending on which consumer audience is being targeted, with a more basic concept appropriate to price-sensitive customers and a lifestyle image tailored for the aspirational market. But generally, he feels, design standards ‘trickle down’ through the market.

Harvey says, ‘Consumers want to feel good in shop environments and that applies at all levels, not just at the top end of the market.’

Both Verdict and the design groups identify increasing pressure on the middle of the market. Kindleysides believes differentiation is becoming more difficult in this area.

‘The mid-market retailers have to work harder on every level to give consumers added layers of perceived value. The key thing now is to have an offer that’s very clear and very immediate.

‘The environment should be set out [specifically] to deliver [an] instant message to consumers. Marks & Spencer’s revival proves [consumers] respond to a clearly defined, targeted product like Per Una or Autograph,’ he says.

Looking at clothes retailing as a whole, Kindleysides and Blass both observe market polarisation.

Blass says, ‘There’s been a sliding away from the middle ground. [Retailers] are either trying to show a bit of value or are going the other way.

‘A graphics-led revolution means that people are no longer embarrassed to shop at places like New Look. But, as the high street becomes over-shopped, retailers like FCUK have started to treat their stores as a collection rather than a chain of shops.’

What he describes as ‘corporate consistency’ is being replaced by a strategy of ‘corporate diversity’. Each individual store is expected to have a ‘different flavour’ or a unique feature and customers are encouraged to ‘shop the collection’, he says.

Having a point of difference within a brand’s stores means consumers are more likely to visit another shop in the collection rather than a competitor.

‘Clothing is very much a comparison shop,’ Bain suggests.

Kindleysides says retailers shouldn’t be ‘locked down into a rigid grid format’, but should be prepared to adapt their design schemes according to the building and its location.

Blass agrees and says retailers are now more likely to want to work with the physical qualities of a space. At the premium end, he says, ‘symbols of conspicuous consumption are being replaced by expressions of heritage’.

This was certainly the brief for the Cinch store. But how far should the individualised approach go? For Harvey, it’s a matter of what’s right for the brand and its market. He adds that the life span of retail formats is now drastically reduced, with design subject to ‘constant evolution’.

Blass believes this presents a challenge for the larger consultancies, which have an interest in ‘looking for a formula they can roll out’. But, as Kindleysides says, the challenge for designers has always been to balance original design with the delivery of the commercial objectives.

From the perspective of most retailers, though, the success of the value operators will only reinforce the need for store design to deliver the bottom line and help differentiate their offering.