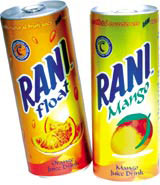 SMR Creative has revamped the packaging for Rani, a natural fruit drink aimed at the Muslim community in the UK, which is to be rolled out from the start of next month.

SMR Creative managing partner Nigel Slater says the brief was to make the brand more appealing to a younger cross section of the target audience.

‘The previous packaging looked imported and didn’t compete well with Rubicon, the market leader in this area. Our approach was to westernise the image while keeping its roots in the culture it came from,’ says Slater.

The drink is more popular among older people at present, but the relaunch is being aimed at 15to 25-year-olds, adds SMR Creative studio manager Paul Burnhill. He says, ‘It is becoming more of a youth drink now because young people are taking pride in their culture.’

But Burnhill adds the brief involved avoiding references to traditional aspects of Muslim culture like architecture and instead focused on the drinks’ ‘sunshine’ properties.

Although the can shape was mandatory, Burnhill says that perceived parallels with the look of energy drinks could help the product to break away from competitors in its shelf space.

SMR Creative pitched for the work in December last year against two other consultancies.

Rani is the biggest drinks brand in Saudi Arabia and is distributed in the UK by Vimto.

2fluid concepts for Best of Health given clean bill