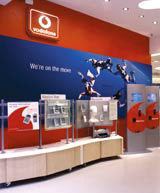 Checkland Kindleysides has created a next generation concept store for Vodafone, at the Harlequin shopping centre in Watford, for a six-figure design fee.

The project supersedes the brand’s existing ‘concept 2000’ format and represents the first time Vodafone has worked with a retail design consultancy, according to Vodafone store development manager Nigel Makin.

Makin says the aim of the store is to educate customers about services other than voice and text, in an environment that invites them to ‘play’ with the technology.

He adds, ‘[Mobile telephony] is a complicated sector of the high street and the store aims to bring the technology to life, while [remaining] future-proof.’

Checkland Kindleysides managing director Jeff Kindleysides says, ‘The absolute [strategic] objective is a more intimate relationship with the customer and the design of the store has to effect that.’

Checkland Kindleysides was appointed in May last year following a seven-way pitch against unnamed consultancies.