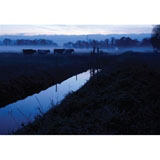 The county of Somerset will launch its first international brand identity next year, designed by Bristol design consultancy Halo Media.

The Somerset Tourism Partnership appointed the consultancy following a six-way creative pitch that took place earlier in the year. Halo Media was shortlisted from a credentials pitch that initially included 16 consultancies. The contract will run for 18 months.

Halo Media is tasked with designing a cohesive brand identity, according to a Somerset Tourism Partnership spokeswoman. Previously, Somerset was promoted using different destination brands managed by the seven local authorities situated in the area.

The intention of the project is also to encourage more weekend-break visitors to come to the area and raise awareness of the ‘premium’ aspects of Somerset, says Nick Ellis, creative director at Halo Media. ‘We need to change the way people see the Somerset brand and turn around a lifetime of clichés associated with the area, to fight against the tide of the misconceptions surrounding this county,’ says Ellis.

The brand identity will be based on a ‘typographic solution’ and have a modern, clean, nostalgic look reminiscent of the 1920s and 1930s era, says Ellis. The logo will be supported by a series of illustrations that will be applied to materials according to key marketing themes and seasons. The colour scheme will also vary accordingly.

The brand identity will launch in Somerset in January. The website, www.visitsomerset. co.uk, which will also be art directed by Halo Media, will go live in March.

Foundation degrees in HE colleges are overdue for scrutiny

Youngest ever winner for Prince’s prize