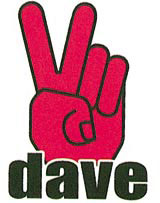 If you’re looking for a blueprint for the consultancy of the future, let me introduce you to Dave. Now, this isn’t some geezer from the pub; this Dave is four ex-Wolff Olins staffers who’ve put together a new sort of branding consultancy.

You can tell it’s a ‘new sort of branding consultancy’ due to the dozen or so kitsch Dave logos that appear on its website and stationery – each one different, each one making a Loaded reader-type statement about style and media savvyness. It’s also got beer mats with ‘Give us a shout’ printed on them (left), and a deck of ‘Dave-branded’ playing cards – hardly the sort of thing you’d catch the venerable Wolff Olins doing.

The four ‘Daves’ are: Robbie Laughton (executive creative director); Dan Bobby (strategy director); Dan Rowe (creative director); and Paul Schriever (designer). I met Laughton and Rowe in a well appointed, glass-box meeting room within ad agency WCRS, the start-up’s ‘financial backer’. It was Dave’s six-month birthday. I asked them why ‘Dave’? Why not Laughton Bobby Rowe Schriever? Why not Purple Biscuit? Or Global-OmniBrand?

‘We liked the idea of someone’s name,’ says Laughton. ‘Something personal and indicative of our style. Something laddish and earthy.’ Earthy is a word Laughton uses often, spirit is another, and both terms recur throughout our conversation. Laughton is a straight-talking, no-bullshit northerner who you imagine would be great company for a night on the town.

When I ask him to talk about Wolff Olins he does so without any hint of a smoking gun. ‘We’d all been there a long time,’ he says. ‘In my case ten fantastic years, but all four of us felt it was time to leave.’ Laughton had reached board level, but listening to him talk about the Wolff Olins boardroom’s ‘fixation with bottom line’, you sense the job no longer suited him. ‘Dave is about swapping an oil tanker for a speedboat,’ he says. ‘We don’t mind getting our hands dirty. We’re like good strikers, we want to score goals. We’re in it for kicks. There are nine of us and no plans to become 150-strong.’

I ask Laughton and Rowe to define Dave. I ask them how, at a time when every design consultancy has mutated into a ‘branding consultancy’, it differs from others in this overcrowded market? ‘Most design groups offering “branding” are really offering corporate identity,’ says Laughton, with evangelical zeal. ‘They are about alignment of a company’s visual identity. It’s a cosmetic thing. They’re not about spirit. We’re about spirit. We’re about total branding – all the way down to the DNA.’

Rowe joins in, he’s more cautious, more guarded than Laughton: ‘We’re not process driven. We’re not a sausage factory. We’re focused on our client’s point of contact with its customer. We might suggest to a client that it makes a short film, for example. It’s about being open-minded, brave.’

Sitting in the WCRS fishbowl, I’m still struggling to work out exactly what Dave does. The matter is further complicated by the fact that so far all its work is under wraps, hence why we can’t show any of it. ‘We’re not a design group or an ad agency,’ Laughton says. ‘Think of us as a film production company, or a creative hub, offering a high calibre service through the use of great people with great skills.’ OK. It’s getting clearer. What is a typical Dave project, I ask? Laughton answers, ‘It’s a client telling us it’s missing something. It’s lost its mojo. We’re working on a project where a company has said to us “we have no personality – how can you help?”.’

So there you have it. Dave is a sort of brand surgery where you can bring anything from cuts and bruises to full-blown personality disorders, and it’ll sort you out.

We’ll have to wait until its first work surfaces to test the effectiveness of its ‘total branding’ philosophy, but my gut feeling is that if ever there was a moment when its emphasis on smallness, graft, earthiness and spirit seemed like the right offer to place before a jaded marketplace, then it’s now. Add to this its lack of arrogance, sense of humour, willingness to use whatever media channel is required and its shrewd alliance with WCRS, and you have a formula for success.

Give it a shout: it will be fun, that’s for certain.