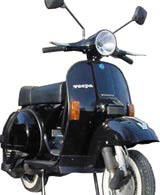 When Colum Lowe talks of strange contradictions (Italian machismo and British males’ prejudice), he perpetuates that by describing scooter riders as being ‘the bottom of the biking food chain’ (Private View, DW 2 October).

In one breath the Vespa is ‘a style icon’ and ‘the thinking man’s scooter’, then it’s a girl’s bike or a trainspotters’ ‘poof-scoot’.

I ride a Vespa T5 and don’t feel any less a man being on a Vespa (although even I look down on twist ‘n’ go scooter riders).

My Vespa has a clutch and gears, the classic Vespa styling, true functionality, and does 100 miles to the the gallon. These are just a few reasons for my riding it.

Yes, I get odd looks and the odder comment from ‘real’ bikers, but it gets me to and from work a damn sight quicker than the train and London Underground, and it’s great to ride.

In the three years that I have suffered London traffic, I’ve only had to physically intimidate one BMW driver who mistook me for a road hump.

As a designer, I’m the only one of 50 staff with an Apple iMac. That gives me a feeling of being part of an elite – and I get the same feeling with my Vespa.

So regardless what others think, and even though everybody else has a ‘proper’ motorbike, I’m going to be staying with the Vespa. It’s my kinda bike.