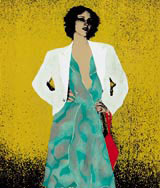 Penguin Books has commissioned independent artist Kate Gibb to create covers for 15 HG Wells works, which are set for reissue in May 2005.

Gibb, known for screen-printed pieces developed for musicians and fashion designers such as The Chemical Brothers and Dries Van Noten respectively, won the work on the back of her existing relationship with the London publisher.

‘Penguin had to find an artist who could create covers for a number of disparate titles. HG Wells wrote science fiction, political fiction and social fiction,’ Gibb explains. ‘What’s great about screen printing is that the technique unites the images.’

Some of the cover designs look set to receive an early airing at File Under Miscellaneous, a solo show of Gibb’s work that launches next week at The Gallery at Pentagram in London.

The month-long exhibition will feature up to 30 screen-printed pieces, half of which have never been seen.

‘We may include some alternative works, because for each piece that has been published or used, there are also pieces that haven’t been used,’ Gibb explains. ‘They’re not necessarily more interesting, but maybe I preferred them. The idea is to give people a broader sense of my work.’

Penguin approached Gibb to create the HG Wells book covers in February. She will complete the project at the end of September.

Smith and Dumeu have to reunite FutureBrand

Kino on the money for financial services body