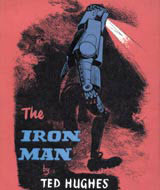 Geoffrey Faber’s passion for original art and literature filtered through everyone employed or commissioned by Faber & Faber, the publisher he founded in 1929.

Faber’s extensive network, including T S Eliot and Richard De la Mare, the first director responsible for book design, ensured his titles challenged the reader both inside and out. A new exhibition celebrates 75 years of Faber covers.

Berthold Wolpe joined the Faber stable as a designer in 1941. He created a distinctive style, a highly expressive typographic display of title and author, often created in permutations of his Albertus font. Wolpe’s colour combinations were diverse and experimental; the imperfections of his hand-crafted type and printing make for a stimulating collection.

In 1980, Pentagram was brought in to give Faber jackets a coherent visual personality. A modular style by partner John McConnell was introduced, building the publisher’s name and making the titles accessible. A beautiful example is Neil M Gunn’s The Silver Darlings, with an illustration by Andrew Davidson. But the style struggles to add value in Hanif Kureishi’s The Buddha of Suburbia, where Peter Blake’s collage fights with a bland and overpowering blue box in the top left corner. In this case both Pentagram’s modular system and Blake’s concoction have been weakened.

Faber & Faber has always been a keen commissioner of artists, illustrators and typographers, initially started by De la Mare and re-ignited by Pentagram, which brought in artists such as Christopher Wormal, Pierre le Tan, David Gentleman and Alan Fletcher. A highlight of the exhibition is the collection of various jackets for William Golding’s novel Lord of the Flies, spanning 50 years. My favourite is the 1980s yellow cover, depicting a powerful illustration of poor old Piggy’s smashed glasses – simple and iconic. It’s a far more emotive reflection of the book’s content than Anthony Gross’s 1956 cover, because the cover concept speaks of the various layers Golding was communicating.

The book jacket has a different function today compared with 20 years ago, as the retailers now hold much of the power. Marketing departments now often specify a ‘formula’ to jackets, based on what has sold best in the past. Publishers should break with convention more often, as it’s a perfect opportunity to differentiate themselves in a predictable market.

This exhibition is a chance to remember the strength, integrity and innovation of UK publishing design, and consider how we can continue to add fresh thinking and great design.

Brian Eagle is creative director at Unreal, where he designs book covers for Penguin and HarperCollins

NCGE identity is a done deal for Thompson