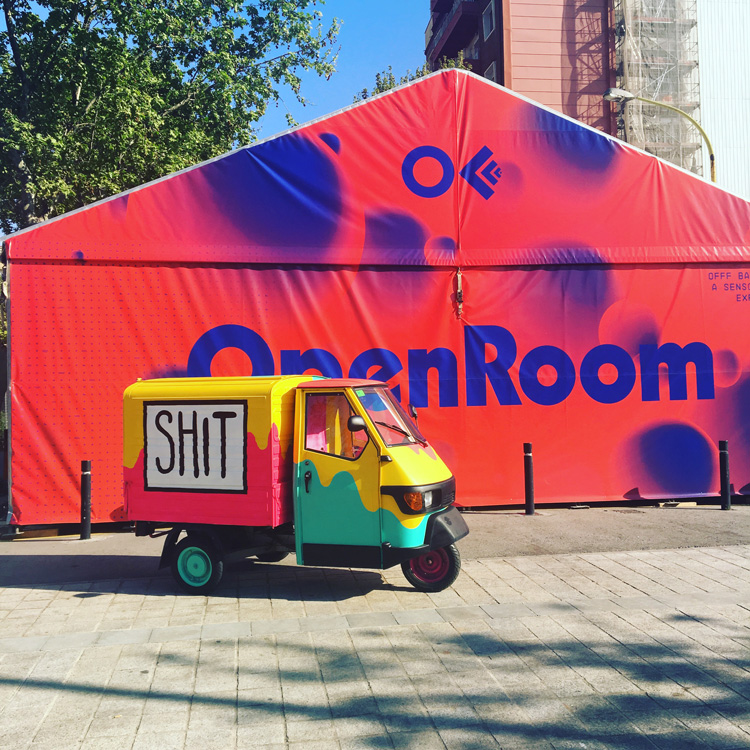 Taking place across two stages within Barcelona’s majestic museum of design, Offf had a far more laid-back atmosphere than other annual design conferences. An outdoor screen accompanied by deck chairs allowed visitors to watch talks in the sunshine, while pop-up coffee and food vendors and an eclectic range of quirky, colourful prints and clothes stalls made the event feel more like a music festival than a place of learning.

But there was much to be learnt at Offf 2017. Speakers included the illustrious American graphic designer Lance Wyman, paper extraordinaire Kelli Anderson and typographic advice guru Anthony Burrill, while attendee numbers reached 9,000. Here are Design Week’s top picks from the conference.

Moving Brands has worked for high-profile clients such as Virgin, Facebook, BBC iPlayer and Netflix. Co-founder Jim Bull spoke about his detest for “sheepism” in design, and implored that designers avoid the trap of trends.

He used food delivery apps as an example, which create a “sea of sameness” with common traits such as Instagram-style food photography taken from above and simple wordmarks. He put the trend of similar style down to the growing sophistication of user testing, which is encouraging designers to “put things in the same place”, especially on mobile.

Bringing up an image of a 1991 advert for United Colours of Benetton, which featured a photo of a newborn baby, he highlighted how shocking, unique visuals will resonate with people, whether they love it or hate it, concluding that perfection is “boring”. He advised that designers take influence from things around them, such as “ancient stories” and the “weather outside”, rather than always trying to emulate the work of others.

But when asked by Design Week how designers can avoid playing it safe when working to the demands of high-profile clients, he candidly added that designers need to remember that the client’s needs come before their own. “Sometimes the conservative thing is the right answer,” he said. “It’s not about pushing for the craziest thing when the client doesn’t want it. There is a lot more on the line for them. The more you can empathise, the better.”

Brooklyn-based designer Kelli Anderson has spent the last decade creating working products made out of paper. From wedding invitations that function as record players through to her new pop-up book that allows readers to make their own camera, she uses a fun and unique means to teach people how everyday objects work.

Speaking at Offf about her design process, she explained that while creating prototypes by hand is laborious, engaging the sense of touch allows designers and non-designers alike to learn things they may not have done through simply reading and theory.

“It’s a more accessible way to learn for those who approach the world through tactility, and who don’t have a PhD in physics,” she said. “Sometimes, everyday things don’t behave the way they’re supposed to. Intuitive understanding normally exceeds formal understanding.”

New York-based graphic designer Lance Wyman has been creating identity systems for over five decades. He is most famous for his work on the Mexico 1968 Olympics and Paralympics, and for transforming the metro system in Washington. He spoke at Offf not just about his work, but his life in general, explaining how a personal letter addressed to him by 1940s Hollywood actor Jane Russell and a scruffy campaign poster he created when he ran for class president at school, were what truly kickstarted his career as a designer.

From hand-drawn posters to personal letters, Wyman has kept these trinkets, alongside stacks of books detailing his rough sketches and drawings throughout his career. UK publisher Unit Editions later turned these into a book; Lance Wyman, The Visual Diaries 1973-1982. Wyman spoke about how flicking through these sketch books still helps him spark new ideas. “Keeping a design log helps me keep track of very complicated design systems,” he said. “I find things I completely forgot about when I look through it now. You can’t teach someone how to have a concept, it has to be an experiential thing.”

Leta & Wade: Let your personality show in your work

Graphic design and photography studio Leta & Wade is composed of Brooklyn-based Leta Sobierajski and Wade Jeffree. Both co-workers and a couple, the pair discussed how they had no qualms about injecting humour into their work and making it personal.

They recently released Complements, a photography book which involves the pair of them using obscure props against colourful backgrounds in different situations, showing how they have made self-deprecation part of their success, and used it to connect with people.

“We’re a little bit do-it-yourself,” said Sobierajski. “We want our personalities to shine through with what we’re creating, and to make things that resonate with people, whether beautiful, strange or offensive. We want to get emotional reactions from what we’re doing.”

Graphic designer Anthony Burrill is best known for his colourful, motivational typographic posters, asking simple requests such as “Work hard and be nice to people”. Using traditional letterpress with no digital enhancement, his posters are humble and distinctive, but aim to impart small pieces of advice and “spread the joy a little bit”, he said in his talk.

Aside from his eponymous posters, Burrill has used print campaigns to highlight social and political issues. This includes Innocent Targets, a shocking gun crime awareness exhibition featuring photographic posters of people marked with target marks, and Oil & Water Do Not Mix, a poster series Burrill printed using crude oil that had been washed up on the beaches of Louisiana following BP’s huge oil spill on the Gulf of Mexico in 2010.

“Making posters is not enough but it’s important to talk about these subjects with your work and try to tackle things like this,” Burrill said. “There’s a huge design industry out there making profit for commercial clients. As designers, we have a responsibility to make a positive contribution too.”