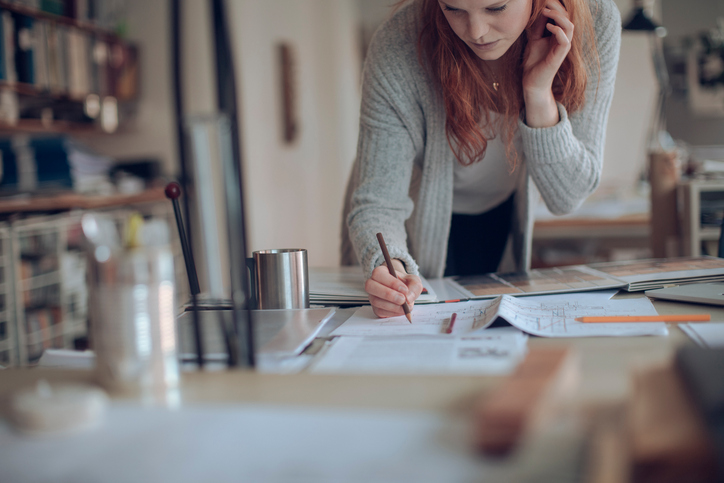 If you’re a woman in design, I recommend you have a large gin before you type “famous graphic designers” into Google. If you do it, check out the image carousel that pings up at the top of your results. Sure, I’m girl-crushing on Paula Scher as much as the next woman, but after five spins of the carousel, it shows me just five women out of 50 people.

Then again, at the last count, only 11% of creative directors in our industry are women. Given this ratio, Google (as ever) is pretty much spot on.

At Kerning the Gap, we’re trying to change these ratios, and get more women into leadership positions across the entire spectrum of disciplines in the design industry.

We’re constantly seeking to better understand why this is such a challenge, so that we can smash the status quo apart and create some real and tangible change. And with such an energised collective, we’re already gathering momentum.

The question we rarely stop to ask though is, why was it ever thus? Weren’t there any women designing when Paul Rand and Saul Bass were defining the craft?

The majority of design students are women – so where do they go?

Preparing for a talk at Ravensbourne on the history of women in design, I was dismayed to discover that work from female designers only accounts for 30% of the design curriculum at London’s Central Saint Martins (yet 70% of its students are women). The Guardian also reports that art and design degree courses in general are dominated by women. Yet a Design Council survey shows that only 40% of professional designers are female.

The thing is, they were there: the Nike swoosh; the original A-Z (look up Phyllis Pearsall – her story is amazing); the UK’s road signs; and the 1984 LA Olympic Games identity – they just never had the profile.

Without turning this into an essay about the evolution of the design industry, the industry we know and love today has some roots in the arts and crafts movement, where women were not only present, they were actively encouraged to embrace it as a “wholesome” pursuit. But, being as things were at the turn of the century, they were not allowed to hold any official memberships. Their “supporting role” was ingrained from the outset.

Moments in our feminist history, such as poster creation for the women’s Suffrage movement in the early 1900s, gave women designers their first foray into full creative control. Then, of course, war, and the world of work for women changed forever. We had kept the country going, and we were NOT going back. Introduction of the pill in the 1950s boosted our pay equality by 30%. Then we campaigned and got the Equal Pay Act in 1970 (granted, that has been in place for 47 years and women are still 18% behind – but that is a matter for a whole other editorial column).

Only 11% of design business leaders are women

So, here we are in 2017, political, biological and economic barriers have been gradually trampled down and, much like the good old arts and crafts days, we have no trouble attracting women to our industry. And yet, we still can’t seem to get more than 11% of them to the forefront.

So why don’t we get profile? Well, if you haven’t read Lean In by Sheryl Sandberg, then buy it now. Its mantra of “We’re holding ourselves back by not raising our hands, and by pulling back when we should be leaning in” is an important truth and I have yet to find a woman who has not identified with it at some point. Combined with this, women are less likely to build their networks or take platforms to speak, and we tell ourselves “how lucky we are” and continuously settle for what’s on offer rather than push and negotiate. I’ve done all of these things in my career.

Thankfully I found excellent role models, mentors and sponsors, who believed in me and pushed me to do more, and who still do. And I now have my own mentees, who constantly teach me in reverse.

Men need to join the debate

And that’s where I think the mantra of “Lean In” needs a counter-balance. I feel uncomfortable, particularly as a leader of a design business, demanding that women take all of the responsibility for solving workplace inequality on their own. Sure, the need to push, question and self-improve is vital, but all people have the responsibility to create workplaces where those women can flourish. To become the mentors, sponsors and role models.

Half of the challenge we have – 89% of it, in fact – is the current lack of women in leadership positions, who act as vital role models, and bring first-hand experiences of their own challenges to help reshape the legacy behind them. Thus the cycle perpetuates. It’s a fundamental part of why Kerning the Gap is a gender neutral collective. Men aren’t the enemy – far from it.

We urgently need men and women to be equal parts of the solution. Whatever your gender, if you’re in a leadership position, you need to ask yourself if you’ve pulled the ladder up behind you; if you’re doing everything you can to boost diversity (of every form) in your leadership team; if you’re mentoring the next generation to get that bloody carousel looking more balanced.

And if you’re an aspiring leader, reach your hand up. Expect more. Call it out. Build your own bloody carousel, if you have to. Kerning The Gap is here to champion you.