“It’s such a weird religion – why do we put all our faith in 11 blokes on a pitch and let it affect our weekends so much?” asks Ed Cowburn, founder of AcidFC.

The AcidFC design studio focuses exclusively on football culture. When Design Week catches up with Cowburn he has just finished the launch of the studio’s latest project, the 2020-21 home and away kits for third tier Parisian football team Red Star FC.

In the last few weeks, there have been several kit launches as the football world prepares for the start of a new, albeit very different, season. Some new designs boast more sustainable materials than ever before; others sport “futuristic” graphics.

But the new Red Star FC kits are attention grabbing in a slightly different way – football crest and sponsorship aside, it features a modern take on the traditional “Toile de Jouy”, a material pattern featuring landscapes and figures that was made famous in 18th century France. 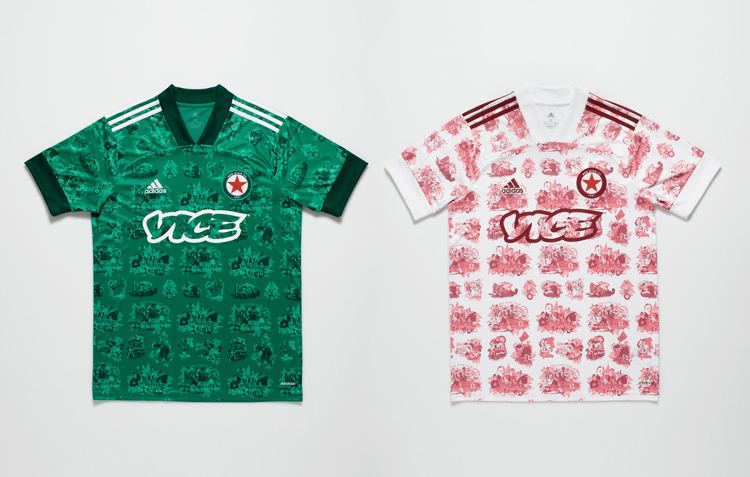 “Using the kit to explore history with children”

It’s been a long time in the making, with the club initially approaching AcidFC around 18 months ago. The brief given to the studio, by Red Star FC’s creative director David Bellion, was for the kit to represent the club’s rich history and vision – it is, after all, the second oldest football club in France, and is also known for its association with left-wing politics and activism.

AcidFC’s research led it to a final design which bears historic and cultural markers unique to the club and its location. Indeed, so accurate is this depiction of the Parisian club’s history, that the design has made its way into local schools.

“The club is using the kit to explore history with children by talking about the figures and players that are included in the Toile de Jouy,” Cowburn explains. “One of the players featured on the kit, for example, fought and was killed in the French resistance in World War II, so with the help of a historian they’re using the shirt to talk about him.”

Cowburn calls this secondary impact of the design the “icing on the cake”, and says this is evidence for the fact football could have “more educational potential for good than most people realise”.

As a London-based studio, designing for a Parisian football club was not a responsibility that AcidFC took lightly, Cowburn stresses.

“It’s a big job to represent the fans – we’re prepared for some not to like the fact a London studio has been chosen to represent them, for some people to say that we don’t understand who the club is,” he says. “But we’re also confident in the fact that we never go into a job thinking we know what is best for a team: every club is different, the fans know that, and we know that.”

Cowburn’s words speak to AcidFC’s wider purpose of designing products so that football fans “feel someone is on their side”. In today’s modern game, he says, fans aren’t always treated well.

“Clubs like Wigan Athletic (which has recently fallen into administration) are a good example of this,” Cowburn says, “it’s not the fans’ fault things have gone badly, but they’re the ones who suffer the most.”

A lack of consideration for fans trickles down into club merch, he says, where branded products from football teams are usually “cheap and throwaway”.

Cowburn recalls how as a child browsing through club merchandise catalogues: “It would be things like really bad watches and jewellery, or tacky bedspreads.” Beyond designing football shirts and kits then, the studio also creates “lifestyle” products for clubs.

“Football is such a big identifier for people, but lifestyle products for football fans just feel second class a lot of the time,” he says. “Why can’t all clubs be prepared to launch merch that fans actually want?”

One example of the studio’s attempt to change this is the work the team did with California-based club Oakland Roots. Playing on the club’s deep-set ties with its community and the area’s affinity with skater culture, AcidFC designed and developed a series of three skateboard decks that bore the club emblem.

“The motivation behind a lot of the work we do is to consider whether anyone, football fan or not, would want to put our designs on their wall,” says Cowburn. “I think clubs have an ethical responsibility to design merch fans actually want, and that won’t end up the same as other fast fashion items and get thrown away.

“For Oakland Roots, skate decks were the perfect meeting point of all these things,” he adds.

“If you don’t like a kit that season, you know another one is coming”

This “wall test” is how the studio judges their kit designs too: “With football kits designs today, 99 out of a hundred times I don’t think people would be happy to stick their team’s latest shirt on their wall,” he says.

Fans not liking their club’s latest strip isn’t all that uncommon nowadays and connections with kits aren’t necessarily as strong as they once were, Cowburn explains. This is largely because designs are “transient” now, since there are new releases every season.

“If you don’t like a kit that season, you know another one is coming,” he says. “Personally, that’s not an approach I like.”

That said, no number of kits, nor how much work goes into them, can sway fans’ emotional relationship with some designs and this is something AcidFC has to understand, Cowburn says.

“When it first launches people might hate it but if their team goes on to win the league, all of a sudden those feelings change, and vice versa,” he says. “And as much as we as a studio can’t do anything to change that, I find that psychology fascinating.”

Since launching in 2017, the studio has taken on several other types of projects, from creating World Cup posters, to branding its own record label and developing the match day programmes for local club Clapton FC.

Most of the work carried out by the studio is done with its signature “psychedelic” twist, something Cowburn says is reflective of the turbulent times we’re living in.

“There’s a lot of psychedelia going on in design culture at the moment and that’s a repeat from recent history – it happened in the 1960s and 1970s in the face of Vietnam; in the late 1980s and early 1990s with Thatcher and the Cold War; and I think it’s happening again now,” he says. “Now is a time to go a bit wild again with design and make people happy.”

With a relatively diverse portfolio process routes always differ, but every project is born out of a meticulous research phase: “You need to tap into the fans, the history and the psychology of a club if you’re going to get it right,” Cowburn says.