Centaur Robotics has developed an alternative to a traditional wheelchair which it hopes will drastically enhance the mobility of elderly people.

The chair, named the Centaur, has been developed by the company’s design director Paul Campbell.

The motivation behind the wheelchair comes from Centaur Robotic founder and chairman David Rajan. (No affiliation with Design Week’s publishing company, Centaur Media)

Rajan’s son was born with cerebral palsy, and when he began looking for a wheelchair to help his son move around, he couldn’t find one that was fit for purpose. Almost none, he says, fulfilled his vision of being both functional and aesthetically pleasing, and those that did were not accessibly priced. 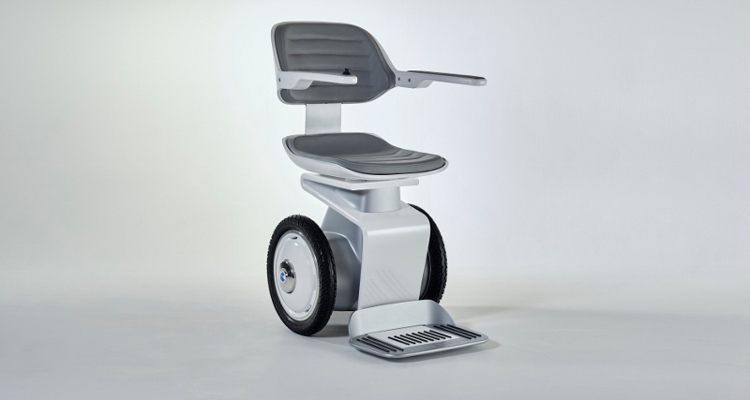 A focus on the elderly

Wanting to change this, Rajan approached Campbell initially in 2013, while he was still a chief designer at Ford. Work began in earnest on the Centaur chair in late 2017 and has continued to this day.

After performing initial research into the concept of a robotic alternative to a wheelchair, the company decided to aim its first iteration of the Centaur at the elderly market. The UK is among a long list of countries with an ageing population, and one challenge of this presents is the mobility of citizens.

The company says future iterations of the chair will be more specialised and able to cater to specific disability needs, but an initial focus on the elderly provides a broad range of requirements for the two-wheeled design to satisfy.

“We have positioned this chair as something so that as large a group of people can benefit from it as possible,” Campbell tells Design Week. “It can work for users that just need a bit of help moving around their homes, all the way up to people who are considerably frailer.” 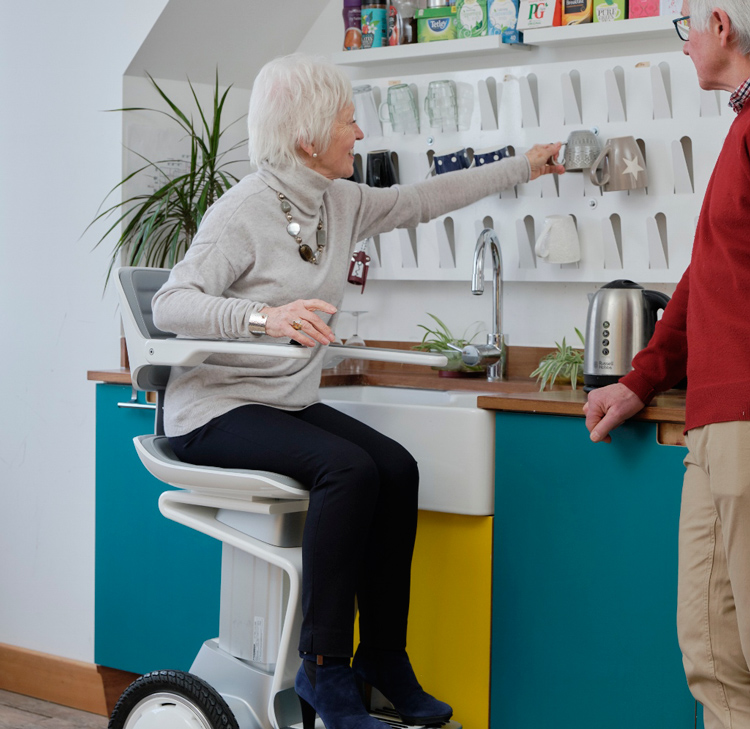 The process of designing the chair was informed in part by Campbell’s own experience with elderly relatives. Using these considerations, he says many of the features “just fell into place”. One such feature is the Centaur’s ability to fit under a dining table.

“When I would have my dad round for dinner or take him out to a restaurant, it was always a fuss to move chairs and furniture to accommodate his wheelchair and he’d feel like he was imposing,” Campbell says.

For this reason, the Centaur uses a lifting column which allows it to lower to fit under a table and its footplate rests on the ground, rather than being raised as is customary with traditional wheelchair designs, so that there is room for others to sit opposite the chair user. The lifting column can conversely be used to raise the chair, for instances like reaching a high shelf. Additionally, the arms of the chair can be adjusted and fold down when necessary.

“To be the centre of attention while people are fussing over you and trying to move furniture out of your way, for example, isn’t necessarily a pleasant experience,” Campbell says. “It’s a dignity thing essentially, and the whole idea of the Centaur is to get rid of some of that fuss practically while also considering the emotional journey for the user.” 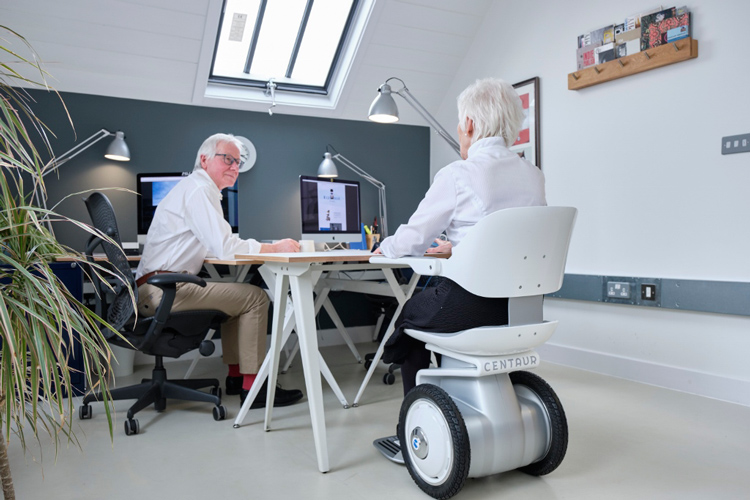 Something to “sit in your house and compliment it”

Alongside functionality, the second part of Rajan’s brief to Campbell was to create something that looked good.

“We wanted to design it so that it could sit in your house and compliment it, rather than be something that is blatantly a piece of medical equipment that hasn’t ever had an aesthetic consideration,” Campbell says.

With a background in designing cars, Campbell explains that the motivation was to design something that gave people the same joy when they looked at and used it as a car does. The final product then, he says, has a clean aesthetic to show that there is an “elegant solution” to the challenges of mobility in old age. 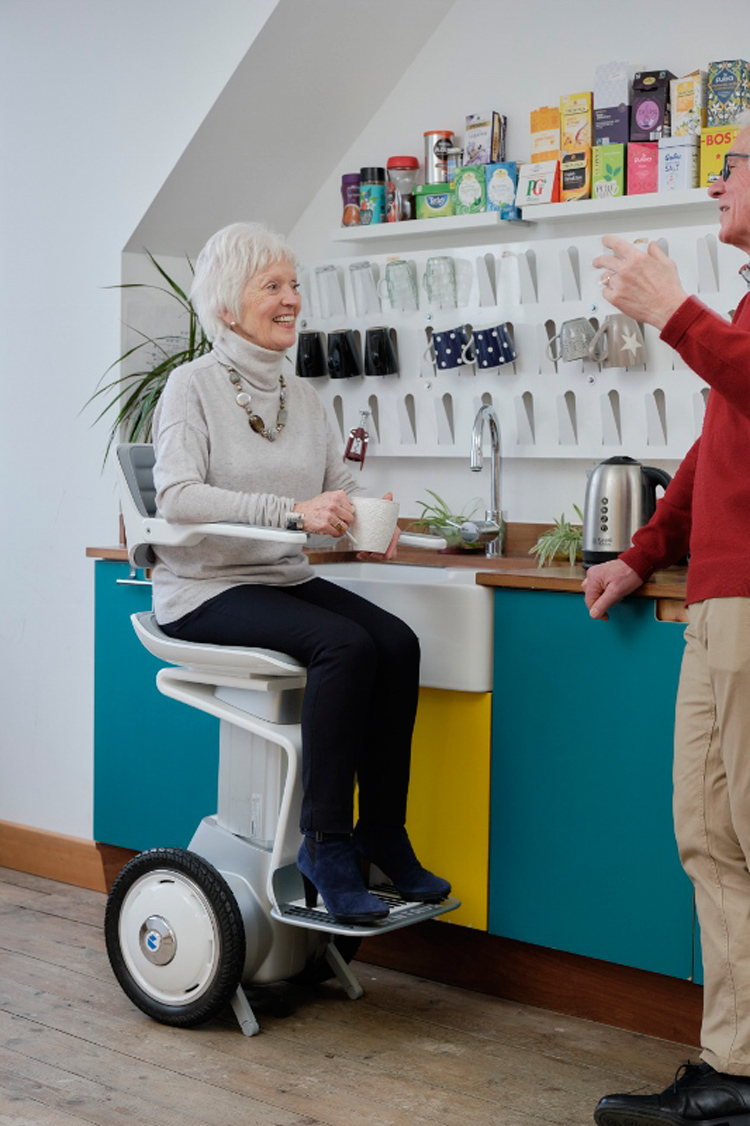 Beyond the physical design of the chair, as its parent company’s name suggests, the Centaur is powered through an intelligent software. In other words, it has “a brain”, Campbell says.

This “brain” has been designed with both the user and their families in mind. For the former, it helps with the day to day running of the chair – for example, displaying battery life and keeping it upright and balanced.

For the latter, if the user so wishes, it can send updates to loved ones or carers notifying when it is being used. As Campbell says, this can be a reassuring feature for children of elderly parents who find peace of mind in knowing they are able to get around. Similarly, if the chair hasn’t been used for an extended period of time, this can be flagged up and investigated.

When asked whether such a technical innovation could be a complication for older generations, Campbell explains that the interface has been designed to be “easy to use for anyone”.

“Even for the most technically savvy of people, good design is simple design,” he says. “The driving force behind everything I’ve designed in my career is intuitiveness – you need to be able to see it and naturally understand what needs to be done to work it.” 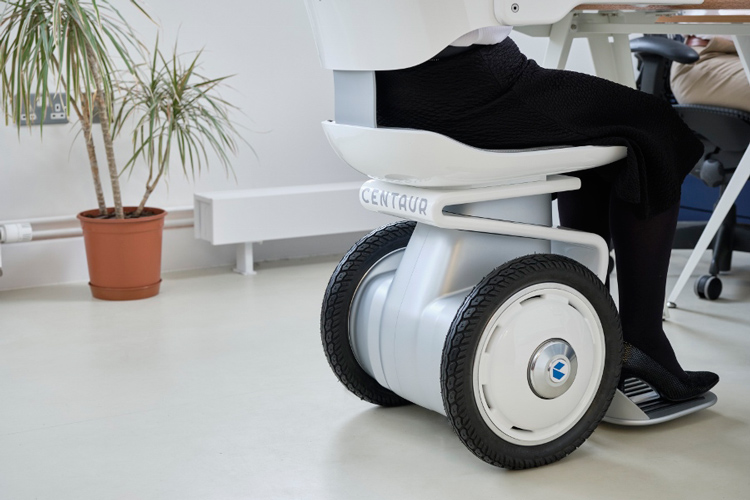 With several years’ worth of engineering and design going into the Centaur, the process has seen both crowdfunding and government grants, including a £50,000 award from Innovate UK.

The chair is going into production later this year, with the first models being sold directly to consumers. Alongside this model, the company is also keen to get the Centaur into care homes – Campbell says in this context a “fleet” of the chairs would have the capacity to do a lot of good.

“They would reduce the pressure on care home staff, especially during times of ‘bottleneck’ like at meals, where attention is divided,” he says. Additionally, because of their easy to clean surfaces and the fact that they reduce the need for unnecessary contact, they could be “invaluable during pandemics”.

“It’s ultimately a product that aims to enhance people’s life as they age, and has been designed to give users a sense of dignity and they’re loved ones peace of mind,” Campbell says.