“Hard as it may be to believe, I’m a child of the 1970s, which means that I’m well versed in the art of the thumbs-up. There was a time when no self-respecting celeb would dream of appearing on the cover of Look In, Smash Hits or Jackie without framing their famous/frightening face with at least one raised thumb, preferably two. Or in the case of Slade, eight.

It’s a practice that Sir Fab Macca Wacky Thumbs Aloft (Paul McCartney) still diligently observes to this day. However, my favourite emoje (singular) isn’t the default fat, yellow thumbs-up offered by Apple to the frequent thumb user. Oh no. My favourite is a Photo-moji thumbs-up, personally handcrafted by Jon Link of Modern Toss – the first of a full set to be released by the House of Toss later this year. As soon as this emojinally intense thumbzilla lands in your text thread, you know you’ve been thumbed. I’m just glad he hasn’t sent me the poo one yet.” 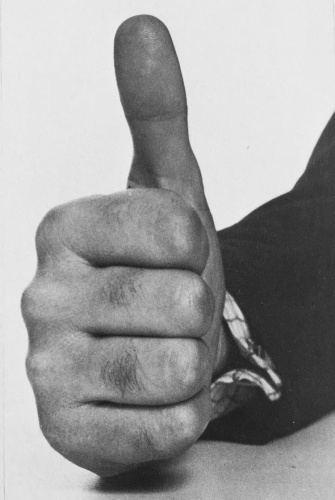 “As graphic designers, we have a slightly ambivalent attitude to emojis. On the one hand, they’re totally generic, off-the-shelf and they reduce using graphics to a reflex cut-and-paste action that requires no real thought. But on the other, they’re actually a fantastic demonstration of how simple images can convey complex ideas in ways that words alone can’t always manage. And with millions of them freely available for anyone to use, they’ve democratised design – and that can only be a good thing. The one I use the most is the heart eyes emoji. Mainly because you can’t have enough love.”

“This June I ran my third marathon. I like to find a way to shoehorn this fact into most conversations, so very unsurprisingly when looking at my most frequently used emoji, the girl runner emoji is top of the list. Worryingly, it’s closely followed by a pint of beer – which sums up my training regime. But one thing that did surprise me was that this emoji is less than a year old on iOS 10 and was added alongside a female mountain biker, surfer, weightlifter, swimmer and basketball player in an effort to introduce more gender diversity. Better late than never, but I am shocked it actually took that long and slightly disappointed that I hadn’t thought to question it before. Anyway, it is moving in the right direction now thankfully. But if I am going to get picky about it, then can we please give the poor girls some hair bobbles?”

“Sassy girl is the best. She has so many purposes. I use it whenever I want to say something cheeky and with sarcasm. Whenever I’m not sure what I’m saying, at least sassy girl is there to make it sound smart. To be exact, my favourite emoji was iOS9 sassy girl. I was really bummed out when Apple changed it some time ago. She lost her spirit and liveliness. Nonetheless, I use the revamped version a lot. Even though there is a sassy boy now, it’s just not the same.”

“My most used emoji has got to be the tiny strong arm emoji. Whether you’re celebrating clambering up a mountain, spotting some neat design or supporting a pal’s post, it just works for all occasions! I think I see it as more of a fist pump emoji come to think of it, and it’s also my go to for whenever I’m making a show of solidarity for feminism and female power. It’s got that ‘Yaaass!’ vibe to it.”

“I use emoji as a kind of shorthand, so it’s not really surprising to see that I use the thumbs-up emoji more than any other. I use it to mean ‘roger that’, ‘okay’, or sometimes ‘this is great, I like it’, so it’s a bit of a classic one-character response to all kinds of messages. It does seem crazy that there is now a shorthand for okay, which was always impressively economical on the character count.

I use the double high-five emoji as a way to add enthusiasm, the scream emoji and the eyes rolling emoji to add humour, the hands praying emoji to say thank you in a slightly reverential way (after having dinner at a friend’s house, for example), and the eyes looking left as shorthand usually in social media posts to mean ‘look’ or ‘check this out’. Then there are topical things like a tennis ball (because of Wimbledon last week), ice cream cone (my three-year-old daughter is obsessed with ice cream) and pizza (I’m obsessed with pizza).

I’ve found myself using the clown emoji, just because it’s ridiculous and makes me smile. And as long as emoji keep enabling us to imbue our typed messages with extra layers of humour, sarcasm, wit and also sincerity in a super economical way – we’ll keep on using ‘em!”

“Well according to Slack, which I tend to be addicted to throughout the day and night, it’s a race between a classic thumbs-up or the thinking face, with the occasional wink for good measure. The thumbs-up covers every situation from good to great, and ‘I’m on it’ to ‘on the way’. It’s eminently friendly, full of positivity and internationally recognised. The thinking face is useful for opening the conversation up and getting feedback, which is always good.”