Edit Collective has designed the space which will house the Barbican’s upcoming retrospective on the Matrix Feminist Design Co-operative.

Active between 1981 and 1994, Matrix was a women’s co-operative that worked in a non-hierarchical structure. The group worked solely on state-funded, social building projects like women’s and refugee centres while also providing construction training workshops and publicly-funded architectural advice. Additionally, it established educational programmes to increase access for women in architecture and construction.

How We Live Now: Reimagining Spaces with Matrix Feminist Design Co-operative will showcase the group’s previously unseen archive, and has been co-curated between the Barbican and Matrix founding member Jos Boys. 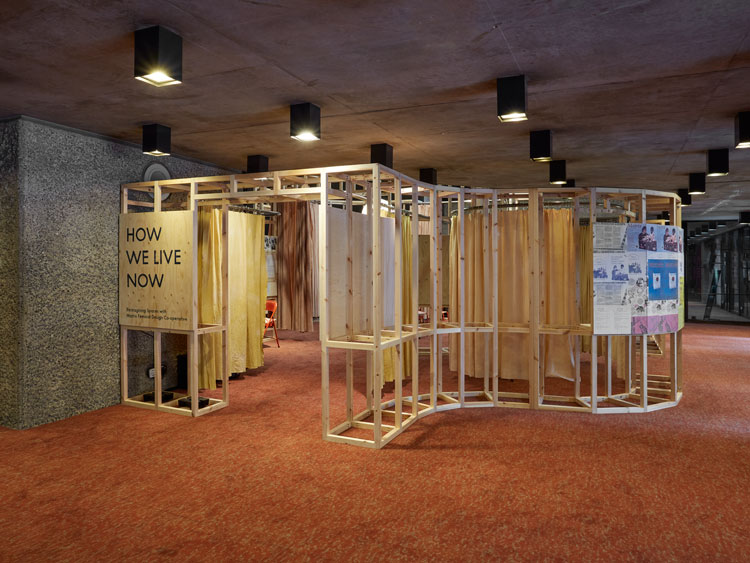 “Different to a regular, stuffy exhibition”

Edit, a UK-based feminist design collective which employs a similarly non-hierarchical structure to Matrix, was invited to pitch its proposal for the design of the space. The entries were judged by curators Jon Asbury and Boys.

The brief, according to Edit designer Alberte Lauridsen, was to create something “different to a regular, stuffy exhibition”. These types of exhibitions tend to “only focus on the few final, refined pieces”, she says, whereas the aim here was to elevate the “behind the scenes process work”.

Several strategies have been put in place to ensure the likes of construction diagrams and even emails are given the same importance as final products, Lauridsen says. One of the most straightforward is the placement of certain artefacts on display. “The scrappy model that was used as part of the design process for the Jagonari Women’s Centre [one of Matrix’s best-known projects] is elevated to a display case, while the final images are pinned to plywood,” she says. 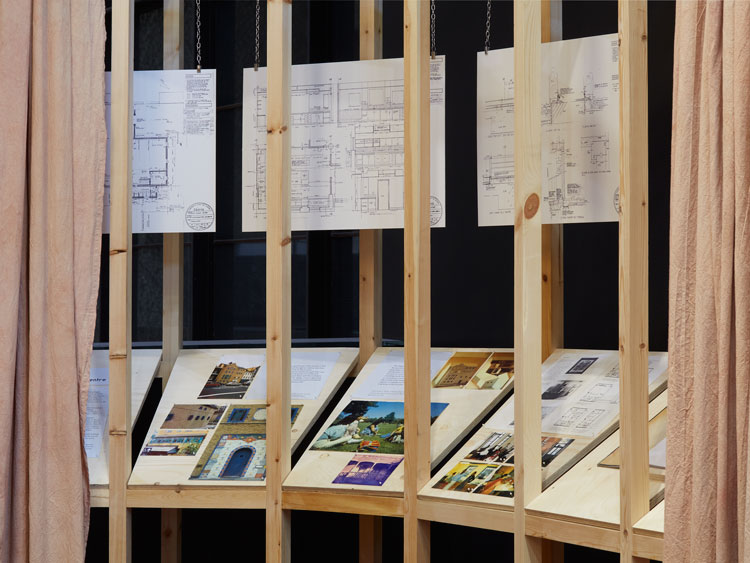 “A more intimate and comfortable space”

The desire to play with the aesthetic of domestic spaces is a key theme throughout the project, Lauridsen says. Political and community groups often informally appropriate domestic space for their cause, she explains, for example by meeting in someone’s living room or gathering around a kitchen table.

Lauridsen says Edit has taken this idea and reversed it – instead taking a space that is intentionally not domestic and making it feel so. It was a challenge to create an intimate space within the “cavernous” Barbican foyer, but she says the team achieved it through three key tools: scale, walls and curtains.

To combat the “sheer scale” of the Barbican foyer, Lauridsen says a smaller space within the larger setting has been created and then smaller spaces inside that. “This creates a more intimate and comfortable space, made up of domestically-proportioned nooks and rooms,” she says. 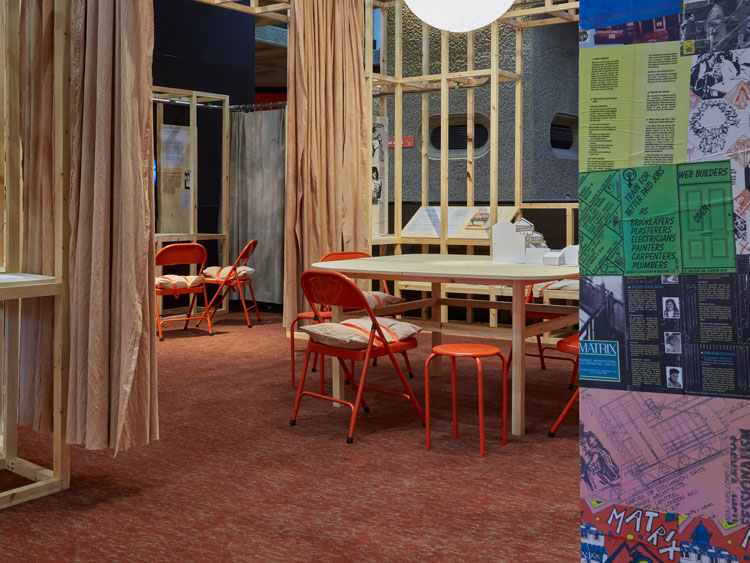 As for the walls, Lauridsen says this is a nod to the values of Matrix. “[They] sought to make architecture accessible to those without a formal architectural education,” she says. “So we wanted to be very honest in the construction of the exhibition.”

The “walls” then have been made out of timber studwork, she explains. “This references the construction technique typically used to create internal partitions in houses – we wanted to reveal what happens if you take off the plasterboard and look inside,” Lauridsen adds. These structures have then been “punctured” with openings that mimic doors and windows, to again draw up aesthetic associations with real homes.

A continuous curtain rail loop finishes off the exhibition. This rail “weaves in and out of walls”, in the same way that plumbing pipes might, Lauridsen says. The addition of a curtain brings both “connotations of domesticity and privacy”, but also allows visitors to interact with the space itself. “By moving the curtain around, you can open up or enclose spaces to create different levels of intimacy,” she says. 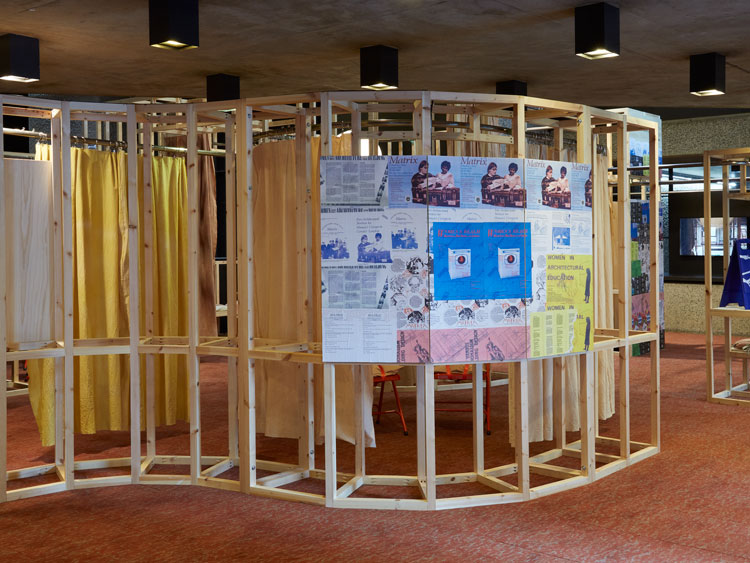 “Something that is designed by a lone, genius male figure”

Lauridsen adds that as far as was possible, the design work sought to challenge the idea of architecture and design being “something that is designed by a lone, genius male figure”. She says a diverse group of fabricators and designers were brought together to counter this understanding.

The carpentry and metalwork for the installation has been fabricated by Elouise Farley of Lady Wood, a project that describes itself as aiming to “teach and encourage womxn in woodwork”.

Meanwhile the textiles found in the showcase have been naturally dyed by Rachel Jones-Jones, using a foraged palette based on the area around the Barbican. Additionally, Hannah Cawley of Cawley Studio, has made the cushions and the all-important curtains. 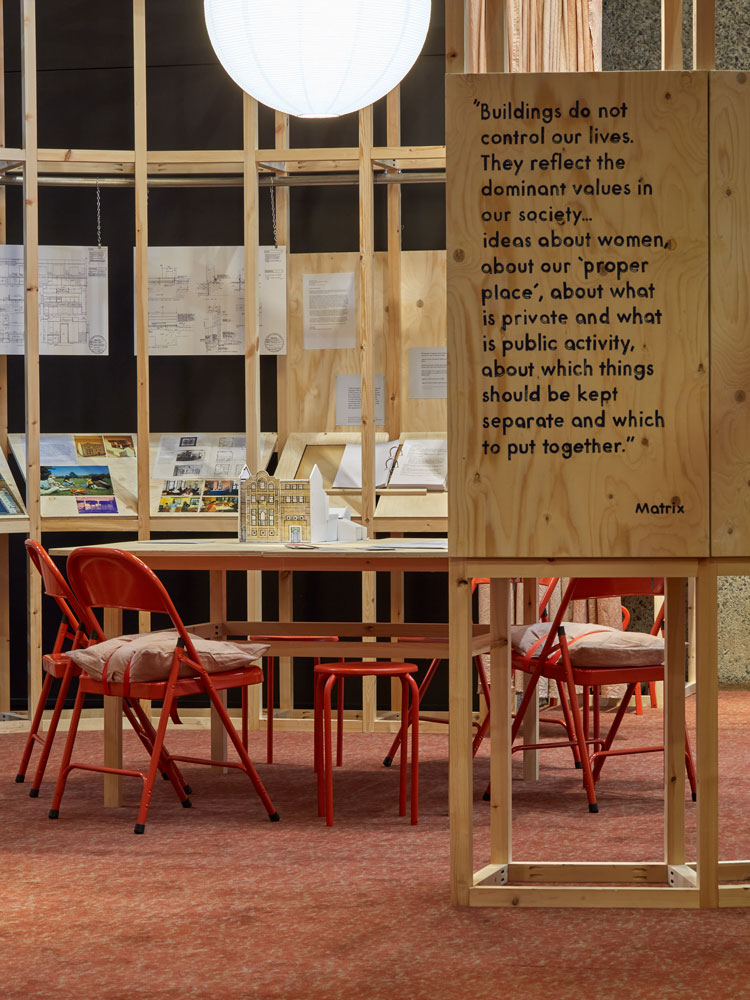 When all the curtains are “open,” the main, larger space is intended to be the “social centre of the exhibition”. Further into the year, this will host a programme of meetings and talks based on the exhibition.

And once pandemic restrictions have eased, visitors will be able to take advantage of the “multiple routes” around the space. “As it is intended to be used as more than purely an exhibition, we designed in multiple routes to prevent it from feeling like one,” Lauridsen explains.

“There are multiple thresholds into the space, all domestic in scale as they sit beneath the Barbican’s mezzanine, and to get to the taller, innermost room, you have to pass through two openings, creating varying levels of privacy and intimacy throughout,” she adds.

However until this is the case, visitors will need to follow a one-way route which has been prescribed by the curators.

How We Live Now: Reimagining Spaces with Matrix Feminist Design Co-operative runs from 17 May-23 December 2021. More information on this free exhibition can be found on the Barbican website.

All pictures by Thomas Adank.