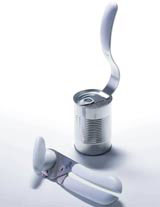 According to Robin Levien, one of the most flattering remarks ever made about a piece of his work was that it was ‘too sexy’ to appear on a magazine cover. The magazine was Design, the erstwhile design review published by the Design Council, not known for its erotic content. The year was, if memory serves, 1990. And the person allegedly made to feel all unnecessary by this particular image was the wife of the then director, Ivor Owen. His Owenness passed down his spouse’s (only recorded) comments to the editorial office and we were asked to refrain from any further X-rated industrial design-related cover shenanigans.

What Mrs Owen saw in the S-shaped bath grab-handle, designed by Levien for American Standard, we spent many happy hours speculating. But she would surely be appalled to learn that her remarks went unheeded by the designer. Heaven knows what she would make of some of Levien’s more recent deviations, such as the simple, sinuous, one piece ring-pull can opener for Tala or the porcelain hand-held lemon squeezer for Villeroy & Boch, part of the new Home Elements range.

Levien has always had an eye for a curve. Being able to perceive the infinite possibilities of profile and cross-section offered by a three-dimensional surface is, possibly, a necessary talent if you’re going to spend half your life designing bathroom suites for one manufacturer. ‘It’s like Picasso painting his bullfights from when he was a kid to when he was 80,’ suggests the Royal Designer for Industry. ‘There are certain themes you keep replaying that are always relevant. Combining aesthetics, or even sensuality, with practicality, is a theme you can keep coming back to.’

The curve has been out of fashion in bathroom design for the past few years, but as interior design magazines exorcise an attachment to monolithic, box-like, crack-your-head-open-on-the-edge type baths and basins, sensuality may be creeping back. A globular new collection from Alessi, designed by Stefano Giovannoni, may be a sign of things to come.

If so, Levien’s appointment in January as non-executive design director to Ideal Standard in the UK could not have been timed better by the bathroom manufacturer. It is a new post and it takes a 20-year relationship on to a new level. Since the mid-1980s, when he was with the ceramic specialist design group Queensberry Hunt, Levien has been commissioned by Ideal Standard to design bathroom suites on a regular basis. He and his long-standing deputy designer Dave Tilbury were told recently that 15 per cent of Britain’s bathrooms were their work. His Studio range of 1986 is still the best-selling suite in the UK, and the Space collection won a British Design & Art Direction Silver in 1999. When I visited Studio Levien, the consultancy he set up four years ago, a brand new suite was at the blue foam modelling stage in the workshop that adjoins the design studio.

Very few other British product designers have enjoyed such a stable and successful relationship. And Levien’s new position cements the bond even further. His job will not just be to continue designing for Ideal Standard, but to act as a channel, bringing news of design developments in the capital and beyond, and introducing new talents. When I met him, Levien was looking forward to his first trip to the Milan Furniture Fair, paid for by Ideal Standard and chaperoned by fellow long-term consultant to Ideal Standard, Dale Russell of Russell Studio.

Under the new arrangement, Russell will be working in a more collaborative role with Levien and probably other designers, rather than directly with Ideal Standard. Wherever there is a requirement for interpretations of lifestyle shifts and their impacts on domestic design, Levien will call on Russell. She will also continue to suggest new design collaborations for the manufacturer, although the main responsibility for this will be Levien’s.

Despite initial reservations, he is also looking forward to his role as a kind of matchmaker-cum-cultural interpreter between the Hull-based company and new design recruits. ‘It felt weird at first – like I would be replacing myself,’ says Levien. ‘But I can act as a bridge, helping designers understand how Ideal Standard operates and help make those relationships work.’

The way Ideal Standard briefs designers is more order-out-of-chaos than letter-of-the-law, perhaps because of the nature of ceramics manufacture. The process is rooted in techniques of craft production and has traditionally been about edging intuitively towards new forms through trial and error, rather than setting out to solve well-defined technical and aesthetic challenges. The company is, in many ways, contradictory: craft-based and yet, with its acquisition of Armitage Shanks, now having to sell £1m worth of bathroom equipment every working day; and geographically isolated, yet connected to sister companies in Europe and the US with long traditions of critically and commercially successful design.

The first design group to enter the world of slip-houses and toilet bowls stacked up to the ceiling courtesy of Levien is Pearson Lloyd. Levien has followed its work for several years, from Luke Pearson’s time at Ross Lovegrove’s Studio X and Tom Lloyd’s spell under Daniel Weil at Pentagram, through their initial commissions for Walter Knoll, to the present day. ‘I’m really excited about the way they try really hard to keep three things going in their studio: interior design, product design and furniture. One minute they’re doing the interior of Duffer of St George, next they’re doing some furniture for Walter Knoll, then they’re doing a lamp-post for Westminster Council. I love that diversity and, in the bathroom, a holistic approach and a mix of disciplines could be really good.’ Levien, conscious of exposing his protÃ©gÃ©s while they are still familiarising themselves with a new material and set of production processes, won’t reveal what the project is.

He has an abundance of expertise to pass on. But, rather than building up an in-house design team at Ideal Standard, the main change will be a scheme benefitting a new junior designer, sponsored by Ideal Standard for their first year at Studio Levien, but only required to work for 50 per cent of the time on Ideal Standard projects. Following ads in Design Week and The Guardian, hundreds of applications have been received. The successful applicant will be joining a small, but settled team in the Levien studio in London’s Southwark, near the Tate Modern. Levien and Tilbury are supported by designers Matt Brett and Tricia Stainton and studio manager Patricia van den Akker.

The danger of such a strong bond between design consultant and client is creative complacency. How many times can you redesign a toilet, for example? Even in this, Levien still sees challenges. ‘It’s amazing how little it [the WC] has changed in 150 years, and if you only approach it as a style exercise it’s still not going to change. All the industry has been doing is making a nice body to go around the same old engine.’ Levien wants to draw the engineers at Ideal Standard more into the design challenge, to, er, crack such problems as how to connect a cistern and toilet bowl in a more plumber-friendly fashion. When your toilets get used 100 times a second across the country, issues such as this can become consuming.

And, in Studio Levien’s other work for top tableware brands Villeroy & Boch, Guzzini and Dansk, there is a new level of market analysis that is giving direction and inspiration to projects. For example, the Home Elements range of tableware accessories for Villeroy & Boch, a huge hit at this year’s Ambiente Fair in Frankfurt, came out of a set of informal modern eating and drinking scenarios – microwaving leftovers, tea and toast on the sofa and so on – presented by Levien. They gave rise to a range of free-standing, non-design-matched, multi-use items in a range of materials – a complete contrast to traditional porcelain crockery.

‘It feels like a good period now. We have enough experience as a team that we can really take advantage of the skills and expertise we’ve built up. It feels like we really have a grip on what we’re doing, and that there should be a good ten-year period of doing perhaps our best work.’ And, hopefully, inducing hot flushes in the Mrs Owens of this world.

Rapid prototyping should be seen as one more tool