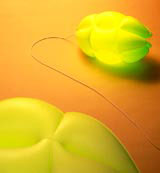 Things have changed a lot since Michael Sodeau was trailing around London selling his Inflate postcards. Today, Michael Sodeau Partnership is strategically placed in an airy studio in design-friendly Clerkenwell, next to the Fritz Hansen shop and its range of classic furniture.

The studio is crammed with his signature rattan lamps and miniature prototypes of chairs, ceramics and lamps that denote the versatility of his expanding business. On the walls, underwater photographs of his ten-month-old baby Oscar are mixed with snapshots of new products. Plans to launch his book, edited by Alexander Payne and designed by Paul Khera and Maria Beddoes, are underway. If you can get him to drop his tools for a moment, Sodeau becomes a human stream of opinions, visions and projects. And the man is only 30 years old.

Michael Sodeau rose to fame in 1995, when, along with his brother Mark and Nick Crosbie – the other two members of Inflate – he built a tiny stand at London show 100% Design to exhibit the group’s inflatable products. Trained in product design at Central St Martin’s, Sodeau had stumbled across the potential of PVC while thinking about his final-year project. “We were given a brief to design something that would retail at under £20,” he says. “At college we had all the facilities [to work with PVC], so I created this inflatable postcard and started selling them at shops in London’s West End such as American Retro and Sign of The Times. I even sold some to RCA students for £3.” At that time, Sodeau was sharing a loft in Shoreditch with other designer friends, including Michael Young, and the Inflate products were literally home made. “We had no walls or partitions of any kind, and this high frequency welding machine was constantly producing inflatable objects.” Although cohabitation must have been at times fraught, Sodeau and Young are still very good friends and sometimes collaborate on design projects.

When the response to the 100% Design show descended into madness, Inflate found themselves producing about 20 objects a day. “There was this one Japanese shop which asked if it could have 10 000 objects!”, says Sodeau. They soon sourced a professional manufacturer to accommodate the growing number of requests. Inflate’s reputation as “the hot new thing” spread so rapidly among the media that they found themselves in “rock ‘n’ roll” type situations. For instance, a taxi driver taking them to the Richard and Judy show asked them earnestly which band they belonged to. On the back of the press success, Inflate were commissioned to do promotional work for the likes of Paul Smith and Ford, and during the next two years Inflate won several design awards. But Sodeau was feeling restless. “Inflate was changing,” he says, “And I felt I was doing very little design. I was fed up with making things. Sometimes I felt like a seamstress, pushing away at the pedal [of a sewing machine] non-stop. I am happiest when I make prototypes and then walk away from them. Most designers get themselves in a rut because they become makers.”

Although Sodeau today acknowledges that Inflate did push the use of PVC to new limits, he was frustrated with being tied to just one material. He left Inflate in 1997 and with his partner Lisa Giuliani, at the time a photo agent working in the furniture world, started his new company, the Michael Sodeau Partnership. Sodeau geared production for the 100% Design show, but this time he only had three months to get it right. “That’s when the floodgates opened,” he says. “I created about 15 designs: rugs, tables, lights, a lounge chair and set about producing them. From having only used plastic, I had to learn quickly about rattan, ceramics, dark veneers and textiles.” Furniture retailer twentytwentyone agreed to host his Comfortable Living collection in their north London store, and the Michael Sodeau Partnership blossomed. Today, it offers essentials such as the Satellite side table, lounge tables, shelves and vases. The range is constantly updated: last year colour was added to the Satellite tables to counterbalance Sodeau’s trademark dark and white tones. Next year, ten new products will be launched.

Sodeau’s design clients include Isokon, for which he has designed a series of wing units, tables and shelves, a collection of rugs that play with recreating surfaces like wood, stone and water for Christopher Farr, and the odd commission, like furniture for a restaurant in Osaka, Japan. For Isokon, Farr and Wedgwood, he will be presenting new designs this September at 100% Design. Italian manufacturer Gervasoni, now under the creative direction of Paola Navone, has snapped up his rattan lamps and produces a tweaked version of them. Talks with other Italian manufacturers are on the way, and although Sodeau has yet to show solo in Milan, he admits he would want to reinforce the Italian connection which he holds through half-Italian Giuliani. Working from her family’s area around Piacenza is a possible future plan. For a designer like him, a mainstream link with the Italian furniture industry could catapult him into the design stratosphere, and there is a feeling that this could be about to happen.

In the meantime, Sodeau is increasingly drawn to lighting design. Tom Dixon’s company Eurolounge will produce his Scribble lamp, due to launch at Cologne this year. A hand bent fluorescent tube, the lamp is stark but also humorous. As Sodeau puts it, “The bulb is the lamp. It’s not necessarily a new material, but it is a new approach.” Because of the simplicity of the idea, the manufacturer is actually involved in the design itself – each piece is almost a one-off.

Lines and their confluences seem to hold a special appeal for Sodeau. His Line Furniture Collection, still at prototype stage, is a series of shelves, coat racks and chairs. It explores the potential of a single piece of stainless steel rod and how it can be manipulated into different shapes, sometimes “scribbly”, sometimes strictly geometric, around the warmer support of plywood. A new ceramic tea set, called Tea Time, with unexpected proportions such as small saucers and huge cups, further expands his research into shape. “I am interested in what makes an object appealing,” says Sodeau. “It’s about having a fresh perspective on how the user interacts with the object.”

Sodeau’s baby, Oscar, has surely given him a new perspective. One of his prototypes is a series of children’s plastic stackable chairs, named after his son. Sodeau is also inspired by the masters; he cites Achille Castiglioni, Charles and Ray Eames, Alvar Aalto, Arne Jacobsen and Jasper Morrison as his favourite five. From Morrison he has adopted the idea that “the design of an object is the sum of its parts, and all the ingredients cannot exist without the others.” Sodeau equates the design process to his second passion: cooking, where diverse ingredients create a perfect mix. For him, the most essential ingredient in furniture is the user, then throw in some form, add functionality, how it relates to the environment and so on. Stir it all up and you get Sodeau’s recipe for design.

Once upon a line, by Michael Sodeau is published this month by Black Dog Publishing, priced at £9.99

Digital design is at the core of the business