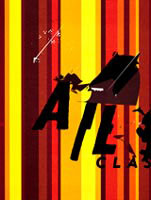 Norwegian born and bred but currently residing in Copenhagen, 27-year-old HiorthÃ¸y has a background in fine art and works in graphics, illustration and films. Adrian Shaughnessy at Intro is one of his admirers. ‘I think his work is fantastic, we included six of his record sleeves for Rune Jrammofon in the book Sampler 2 (due out this October). I like the fact that his work is closer to fine art than graphics. He combines a fine art sensibility but also does very good typography. It’s fresh and different.’

‘I never really wanted to be a graphic designer,’ says HiorthÃ¸y. ‘I started doing it while attending art school seven years ago.’ Since then, he has studied film in New York and done ‘everything, from designing record sleeves and film posters, to children’s books, painting and drawing.’ Of his eclectic, all round approach, HiorthÃ¸y says: ‘I try not to define myself, it kind of complicates things. Usually people approach me in the capacity in which they know me, and then… I just go along with that.’ Recently published is a book on his work, Tree Weekend, a mix of images and anecdotes, one of which highlights the fact that his father worked briefly with Arne Jacobsen. A follow up to his illustrated children’s book Hando.Kjendo, entitled Sunday, comes out in October. Both books are written by young Norwegian writer Tore Renberg. Other forthcoming projects include work with theatre group Bidt in Copenaghen and an exhibition of 300 drawings at Tegnerforbundets Gallery in March in Oslo.

Asked about the Norwegian scene, he says he doesn’t feel part of it. ‘As far as I know, there isn’t really a scene in graphic design, by scene I refer to an arena with a discussion going on. There are young people doing good work – among which I should mention Marius Wats and Halvor Bodin, but no new names. I don’t think there is an arena in Norway for a group like Fuel or Tomato to operate. They work in a field which sometimes crosses over into art rather than just design, but that is not one that is taken seriously by anyone in Norway.’Left: Illustration by HiorthÃ¸y for a children’s book called Hando.Kjendo;

Marketing philosophy turned on its head