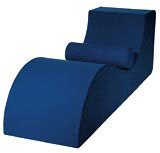 Espen Voll, Andreas Engesvik, TorbjÃ¸rn Anderssen, Frode Myhr and Tore S Borgersen are five designers from Bergen who, disillusioned with the state of Norwegian furniture design, have taken the matter into their own hands by creating the collective Norway Says. In April, with financial backing from the Norwegian Ministry of Foreign Affairs, they trekked down to the Milan furniture fair in a camper van and displayed their pieces, putting Norwegian talent back on the road map, so to speak.

‘There was an overwhelming reaction to our presence,’ says Engesvik. ‘We were the first Norwegian designers to show in Milan for 30 years.’ The five guys – all of whom are in their mid twenties or mid thirties, are from furniture and interior design backgrounds, and some are still at design college. Since the Milan experience, they have been fÃªted by the press and approached by various manufacturers, proving the benefits of proactivity. Norway Says is currently showing a selection of furniture pieces at the Design Museum and will be showcasing 15 new products this autumn at the London Designer’s Block show. In February, it has been invited to show in a New York Gallery.

On the state of Norwegian design, Engesvik says there is a definite lack of big names. ‘When people discuss the importance of design and quality in Norway, they always refer to Peter Opsvik and his products.

‘But he belonged to another generation, one that had ergonomic interests. He invested a lot of money into the products, worked hard to get them going, sold many abroad and has made a lot of money. But we are a bit tired of hearing only about Peter Opsvik, it’s time to open some other doors and move on,’ he says. Having said that, Engesvik acknowledges the influence of older designers and mentions Hans Brattrud, Jan Lunda Knutsen, Ingmar Relling, Svein Ivar Dysthe and Finn Alnes as examples of some who reached international fame in the 1950s, 1960s and 1970s and left a trace in Norway.