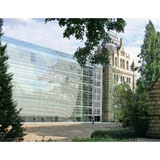 The Natural History Museum has appointed At Large to design the public areas of the second phase of the Darwin Centre, a £65m development which will house the institution’s 28 million insects and 6 million plants.

Darwin Centre Phase Two (pictured) is already under construction and is scheduled to open in 2009. The design, by Danish architect CF Møeller, consists of a giant, environmentally protected cocoon within an outer glass structure.

At Large was awarded the two-and-a-half-year project after a pitch contested by consultancies from NHM’s design roster. A third component of the public offer, a live communications space named in honour of David Attenborough, has yet to be put out for pitch.

The building aims to give visitors unprecedented insight into the museum’s collection, as well as the scientific research undertaken in-house. At Large’s brief is to create the two spaces at the heart of the ‘public offer’ – specifically, the vast atrium and the self-guided tour, which will move through the top three floors of the seven-storey centre.

‘What we are looking for is an exhibition and visitor experience which allows people to see what goes on behind the scenes,’ says Paul Bowers, Natural History Museum public offer project director. ‘At the moment we are at the stage of development and concept design, so I don’t know what it will look like, but I know the kind of experience quality we want.’

At Large director Ned Phillips describes his role as interpretive design, focusing on the way in which information is presented to the public. ‘Signage is one part, but [we are also working on] any audiovisual digital elements, or the way objects might appear in public spaces or within the collection spaces themselves.’

An important part of the consultancy’s remit is to ensure that the visitor experience can be integrated relevantly with complementary Web content. ‘It is very much a part of the brief that anything we do can be expanded out on to the Web, which should offer both an extension and a prelude to the visit,’ says Phillips.

Bowers highlights the scope of the task. ‘We have 72-odd-million specimens – far more than any other museum – so making that accessible is going to be a far more difficult task for us than, say, an art museum numbering a couple of hundred thousand objects,’ he says.

The Darwin Centre development follows a general trend in museum design to bring more behind-the-scenes work to the attention of visitors. ‘Very few people realise that we have more scientists working on-site than most university biology departments,’ adds Bowers.

• Darwin Centre Phase One opened in September 2002, storing 22 million zoological specimens; Phase Two forms a link between Phase One, the Waterhouse building and the museum’s gardens