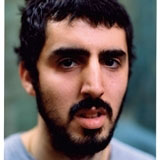 Illustrator Danny Sangra is only 25, but he’s already got a long client list and some top commissions under his belt. Liz Farrelly meets a bright star on the London scene who is trying his hand at fashion

You don’t get any more hip than staging a solo show at fashion store The Pineal Eye in London’s Soho. For illustrator Danny Sangra, this summer’s London exhibition presents an opportunity to realise his most complete visual statement yet; he even decorated 100 beer bottles for the opening party. Talking to him with one day to go, his enthusiasm is infectious. ‘I’ll be painting on to the windows and making the costumes for my friends’ band that’ll be playing,’ explains Sangra. ‘It’s all super detailed.’

Since graduating in graphics from Central St Martins College of Art and Design in 2003, Sangra has been busy. His client list includes Marc Jacobs, American skate brand Gravis and off-the-wall advertising agency Mother, and he was commissioned by Peter Saville for a Sony PSP project. He’s done illustrations for a host of magazines, from Marmalade to Jockey Slut, and painted murals for the studio of design consultancy Harriman Steel and shoe brand Double Identity. He’s even featured in a Sony Walkman cinema ad, working along to his headphones.

With all that going on, some people might play it safe, develop a style and keep churning it out. For Sangra, though, the most important thing is ‘to keep experimenting’. As the website of the Scrawl Collective, which he is part of, puts it, Sangra is ‘like the artistic equivalent of Apple Computer – one month after you buy its latest, most up-to-date stuff it brings out something new.’ 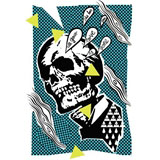 ‘As long as I pay my rent, I can just keep working,’ he states, with a disarming hint of defiance. The 25-year-old was already fulfilling commissions and participating in exhibitions before he graduated, and he is refreshingly anti-corporate. ‘When people leave college, they forget that not every project has to be directed. You don’t have to only do “real” stuff, you need to experiment.’

Sangra’s image-making experimentation encompasses some unlikely media and materials, from painting on glass to screen-printing on to rolls of canvas, which are then cut up and patchworked together with a sewing machine. He has also worked on to drink cans, face masks and shaped boards.

With an aesthetic and methodology that is both exuberant and uncompromising – startling geometrics are combined with visceral, anatomical elements, and black-and-white fashion photography is collaged with found pop ephemera – Sangra finds willing commercial clients while creating challenging personal work. He is one of a new breed of artist/designer, as happy installing an environment in a gallery as he is in front of his Mac laying out an album cover. When asked how his personal and gallery work impacts on his commercial commissions, he says ‘it all links in eventually’.

Fabrics and fashion are his latest concern. ‘It took two days to make a dress for The Pineal Eye; it’s a hand-painted, patchworked one-off. I’m not just interested in designing T-shirts,’ he says. ‘For Gravis, I painted a canvas, then they cut it up and made a pair of shoes with it!’ Having said that, Sangra has designed both T-shirt prints and limited edition screen-prints for the Scrawl Collective, which were selected for sale at Virgin Mobile’s new retail outlets.

‘The only way you can make it is to help each other out; we’ve all got jobs through friends and our circle is getting bigger and bigger,’ he explains. 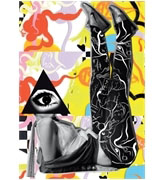 Among that circle are Jo Jackson, Kate Harwood and Kristjana S Williams, the trio behind Beyond the Valley (a shop, gallery and design consultancy that champions recent graduates), as well as his collaborators in A Minute Silence, Rory Brady and knitwear designer Lynn Cockburn. Through his friend, photographer Chris Brooks, Sangra met Katie Hillier, with whom he’s collaborated on accessories for Marc at Marc Jacobs.

Sangra combines enthusiastic optimism with a pragmatic and realistic approach to building a creative career. It’s obvious that he loves what he does, and what he does just keeps getting better.