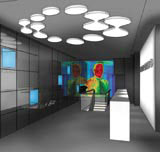 Nascent hand-held gaming device Gizmondo is set to open its first retail store in London’s Regent Street, designed by multidisciplinary consultancy 2Heads. Further stores are likely to follow if it proves to be successful.

The flagship store’s prestigious location is a few doors south of the recently opened Apple Computer outlet (DW 4 November 2004). Its interiors will feature black gloss walls and ceilings, as well as a black rubber floor (pictured).

A key feature of the store will be an innovative 3D plasma TV system. ‘The 3D screens will not be able to show standard video, so we are working with Gizmondo to create specially produced 3D content,’ says 2Heads business development manager Dan Stubbs. ‘We believe that this has never been done before,’ he adds.

The basement level will house a multipurpose ‘bar’ area, allowing reception events to include DJs and the serving of drinks. Standard plasma screens will also be installed downstairs and could be used for music concerts or gaming tournaments, says Stubbs.

The group was appointed to the work on the basis of its ongoing relationship with Gizmondo, having handled events design for the company in Europe and the US.

The Gizmondo device was scheduled to ship to the UK at the end of October last year, but has reportedly been largely unavailable.