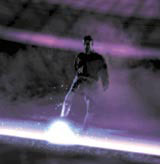 English & Pockett was re-appointed by the football organisation in October, following its redesign of the Uefa logo last year. The previous marque was created by Markell Associates in 2003 (DW 2 October 2003).

Using post-production effects, the Uefa logo is itself transformed into an electric ball of white energy, which blasts across the screen, igniting the players’ silhouettes as they show off their skills.

Uefa brand manager Dan O’ Toole says the on-air brand toolkit extends the creative possibilities. ‘The Uefa Cup brand strategy is based on what you can do, rather than what you can’t. Football action, the fans and the stadiums across Europe are at the heart of the broadcast identity,’ he says.

According to English & Pockett creative director Danny Smit, the on-air sequence has been designed with the ‘raw and unpredictable nature of the competition very much in mind’.

‘We wanted to create a sequence for the Uefa Cup competition that generated a buzz of unpredictable energy. A bit like the moments before a live match,’ he adds.