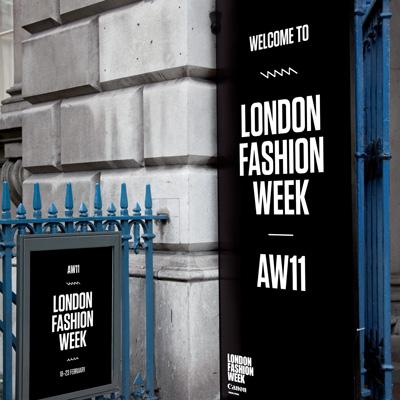 Harriman Steel has created the wayfinding for London Fashion Week, which opens this week.

The consultancy was initially appointed in May 2010 by the British Fashion Council to create a new visual identity for the LFW exhibition, following a pitch.

The identity was used for the September 2010 LFW and the consultancy has now developed a wayfinding design for this spring’s event, which will be centred around Somerset House.

Harriman Steel managing director Jason Bold says, ’Last year we used very colourful graphics and this year we have gone for very strong, bold typography. The tents this year will be black, so the exterior graphics will be monotone and colour will be used indoors.’

Bold adds, ’One of the challenges is that Somerset House is quite a complicated site. We’ve introduced lots of playful interventions on the stairwells, in lifts and other places. We wanted to use the site itself, rather than just putting up big vinyl boards. We want to help guide people in the unexpected places, not just in the big corridors and centres.’

Harriman Steel has also created an installation with scarves for the main stairwell at Somerset House. The installation has been created in collaboration with this season’s New Generation winners and uses scarves from The Creative Archives fashion company.