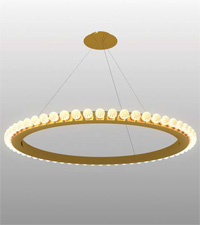 Interior and product designer Lee Broom has designed a lighting concept for Westfield Stratford City shopping centre which is based on jewellery design to reference its retail environment setting.

Broom was selected by designer Tom Dixon from a shortlist of three other designers as part of Westfield’s Studio East initiative, which aims to identify and support local designers and artists.

Having been awarded a £10 000 prize for winning the commission in June 2010, Broom was asked to reference both the context of the centre and the spirit of east London in a lighting design for the three entrance halls leading to the shopping centre.

’It needed to have the feel of east London and not be too corporate, but also recognise the space and finishes used on the rest of the site,’ says Broom.

The gold ’bangle’, which is approximately 1.5m in diameter, contains 60 LED lights referencing jewels which have been set behind ’fairground caps’ to give ’a sparkling effect finish, also reflected off of the walls’, says Broom.

Both Westfield and Broom say they are in talks to commercialise the design as a scaled-down domestic product, although nothing has yet been confirmed.

Westfield says that Broom will work with electronics company Philips to realise the entrance hall design, which is now in prototyping stage ahead of manufacturing for the centre’s opening in September.

The Studio East initiative has also seen artist Tatiana Echeverri Fernandez commissioned to design a piece of public art which will see stair treads from escalators stacked into several totem columns. Fernandez was selected from a four-strong shortlist by Tracey Emin.

According to Westfield, Fernandez will use the curved form of an escalator stair, usually hidden from view, to shape the design and may use coloured ’vintage examples’ of London Underground escalators.

Bruges’ and Fernandez’s installations will be set in close proximity in view of the main site lines approaching one of the centre’s public squares. Westfield estimates that this will be overlooked by 70 per cent of the footfall from Olympic spectators, travelling across the town centre link bridge to 2012 games venues.