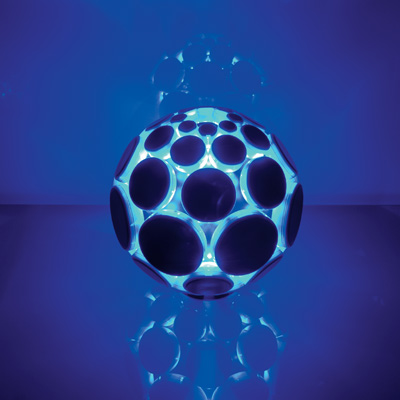 This Friday in Bristol, seven innovative projects will be delivered by competitively selected designers unrestricted by any client brief as part of the Media Sandbox initiative, a programme helping companies with interactive and digital media research and product development.

The annual programme was set up in 2008 by iShed, an organisation which fosters innovation and collaboration between industry, artists and creative companies.

The scheme has awarded £10 000 bursaries to each of the seven selected commissions in two categories, B-Open, (open data digital development) and Pervasive Technologies, (development of interactive, technology-led products). Media Sandbox provides the projects with space at the Pervasive Media Studio in Bristol.

Academics and companies collaborating with the studio, including Microsoft and the BBC, provide development help.

Prompted by the last Government’s Digital Challenge competition, Bristol City Council is publishing selected data. B-Open winners have designed digital expressions of this which share data with the local community.

Blossom Bristol, designed by two-man consultancy Mobile Pie, is a mobile game download encouraging players to plant virtual crops in Bristol and track them as they fail or flourish, depending on real environmental data.

’It’s a fun and engaging way to interact with raw data, which is based on real things, rather than arbitrary values,’ says Mobile Pie director Richard Wilson.

As a commercial application, the benefits for Wilson are ’access to real data’ and exposure. He adds, ’There might be opportunities for advertisers. Instead of people harvesting crops for virtual currency, they could be given a voucher to use, say, in an organic food shop.’

Blossom Bristol is one of three projects with an intended consumer, a client (of sorts) in Bristol City Council and an intended purpose.

Some of the Pervasive Technologies projects have been designed purely with innovation in mind. Alphasphere (pictured), by Nu Desine, is an electronic instrument with a tactile interface which allows users to interact with sound. Designed with DJs and music producers in mind, it could be adapted as a home product for remixing music.

’It takes electronic sounds away from laptops and back to instruments and interaction,’ says Alphasphere creator Adam Place. ’Its pads are pressure-sensitive and you can modulate and wobble sounds through hand contact.’

While Place recognises immediate potential for commercial development of the Alphasphere, the Sculpting With Scent project, designed by Moksha, typifies the innovation for innovation’s sake attitude of Media Sandbox.

Designer Darius Pocha says the project aims to create a new ’digital language’ based on smell, ’our most physiologically powerful and underused sense’.

Sculpting with Scent consists of four pebble-shaped objects. As an observer approaches and picks up the first one, lights pulse and vibrations are felt before a smell is emitted.

Through such interaction an olfactory narrative is told, which develops as each pebble is picked up and replaced. Pocha says, ’In one, you encounter an old study that smells of wood, books and cigar smoke. As you pick up the second pebble the windows are thrown open and the smell of cut grass is released.’

A separate narrative offers, says Pocha, ’a hotel lobby, which leads out to Tokyo street smells of Tarmac and fish before you encounter the human smells of an old friend’.

Pocha suggests there is potential for the project to be developed for brands and high-end retail or as a medium of artistic expression for museums and galleries.

He is clear, though, that to arrive at the point of delivery without a client in mind is only made possible through the scheme.

’Rarely would you find the funding opportunity to do something like this otherwise,’ he says.

Full Pick Me Up line-up unveiled