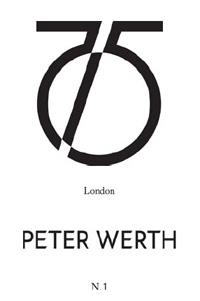 The Gild has repositioned menswear label Peter Werth, creating a new identity and overseeing art direction as the brand looks to connect better with its customers.

Appointed through a two-way pitch in October 2010, The Gild initially carried out a strategic review of the brand to consider its ’traditional and contemporary values’ in the context of the fashion market, according to Gild design director Alexia Cox.

A new identity, secondary marque and look books will roll out ahead of the autumn/winter 2011 collection, which will hit stores in the summer.

The primary identity connects the brand to its heritage and to its base in Islington, north London, says Cox. She has chosen an Adobe Caslon serif font to confirm a connection with the London borough, which was the home in the 18th century of the Caslon type foundry.

The work also has to lead a ’refined visual language’ which is pervasive in the new brand, according to Cox.

A secondary marque has been designed to affirm the brand’s heritage by referencing the year 1975 – the year in which the brand was founded.

Art direction of photo shoots will lead into ads and look books in a bid to forge a new connection with consumers, ’capturing something cinematic with movement’ through a look which ’off-plays the traditional and contemporary’, according to Cox.