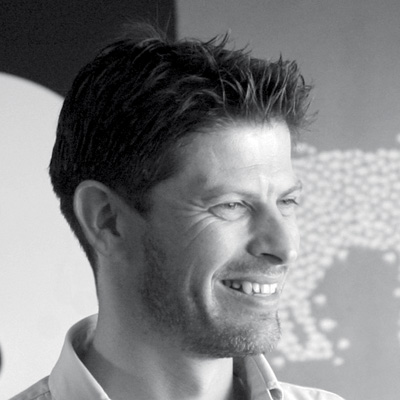 It was 21 July 1986 and I was sitting opposite The Partners’ co-founding partner, Malcolm Swatridge, talking about the test match over lunch on my first day at work, thinking, blimey, this is just like being at college. Twenty years later and I was looking over my desk to his look-alike daughter, Alex, whom we had just employed at Hat-Trick Design. The circle of life was complete. Some things don’t change: I’m still listening to 1980s music and still have my best ideas in the toilet but, wow, how things have changed in design in most other respects.

Back then, everything seemed to be craft-related – the craft and hand skills of laying out type, literally cutting and pasting, using drawing boards, beautifully covering artboard to create neat little piles of artwork.

The work itself was different in nature. Lots of stationery ranges. Corporate brochures even – a rare beast now. I don’t remember having anything to do with guidelines at the start.

A lot more illustration was used then. An annual report using a dozen top illustrators wasn’t uncommon. I suspect the sheer speed and convenience of manipulating imagery in Photoshop has put paid to some extent to the imaginative use of illustration. We just had nice graphic design ideas. We were graphic designers and we designed graphics.

But then things got a little muddled, at least for me. There seemed to be a move by some to define what exactly it was we did. Was a corporate image the same thing as a corporate logo, or was a logo a brand mark (or should that be marque)? And were any of these things a corporate identity?

Eventually, we all seemed happy with ’brand identity’ which kind of encompassed everything. Likewise, at first we were graphic designers, then we were design consultants, now we are branding agencies – sorted.

There were two massively significant advances along the way that changed our working methods. The first was learning to use the Apple Mac so as to be able to lay out pages in Pagemaker, thereby bypassing external typesetting. The second was getting access to the Internet, and more specifically getting ISDN installed.

Before that, we were all rigged up to a dial-up modem and so, laughably, we were supposed to call out to see if anyone was online and if we forgot, we would ’bump off’ whoever was already online. This also meant that we had to dial-up to check for e-mails – a somewhat ludicrous concept now, where e-mails come thick and fast all day long.

What I like about today’s design world is that it is so much more sophisticated in its methodology. Whereas once I would trundle off to the art college my mother called ’the funny farm’, now I feel I am in an industry that is pretty highly respected and more and more understood. Briefs are now much more sophisticated, which is a good thing. ’Brand blueprints’, whether provided by us or by clients, have become more common in creative briefs, which gives designers clear criteria against which to benchmark.

The way we work has changed beyond recognition: libraries as places of inspiration and reference are fast being replaced by Wikipedia, FFFound, It’s Nice That, Johnson Banks’ blog, Sanky’s tweets and, of course, everyone’s websites – all from the luxury of the laptop in the kitchen, or the iPad in bed, or the iPhone anywhere else.

A world of sharing seems to be the way forward. Whether with other designers, strategic consultants, digital experts or copywriters, designers are more readily seeing the benefits of opening up and allowing collaborations. Growing your network certainly helps to open up opportunities. I think it’s admirable that we are in an industry where we respect and laud our peers and (mostly) see ourselves as all in the same boat.

What clients demand of us will keep changing. I think more and more they are looking to us to ’challenge’ them, rather than react to their briefs. There was a day when we didn’t look further than the eight-page leaflet we were asked to design. Understanding clients has never been as important. What clients want isn’t necessarily what they need, so we’re getting to the point where we need to know better than they do what’s best for them.

This is a good way to think as a designer -to flex those brain muscles and think laterally into new, unfurrowed territory. With the trend towards brand extension to new media, online advertising, apps, Facebook, there are many new ways for a brand to be expressed and it is for us to help introduce our clients to that world.