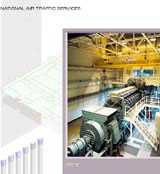 It will be on show in the centre’s viewing gallery, overlooking the third-floor operations room. NATS will also use the tour to present at conferences around the world.

‘As it is an operational centre, you can’t have people trooping through it to see what’s going on,’ says a NATS spokesman.

The CD-ROM explains NATS’ role and how it operates alongside other European air traffic control centres. It also depicts the building, using panoramic and still photography. ‘The centre explodes into floors and the viewer can explore each one individually,’says Cohen.

Arclight worked with NATS for two years on other installations.