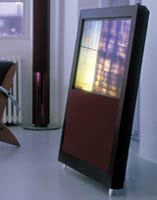 Created by freelance designer David Lewis, the 42in (107cm) screen can either be wall-mounted or positioned on a motorised stand or wall bracket to suit viewers’ needs.

The BeoVision 5’s screen is enclosed in brushed aluminium, designed to lend it a ‘passÃ© partout’ framing effect: a technique used for mounting paintings that is intended to draw the viewer’s eye to the screen.