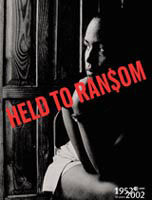 Held to Ransom, a campaign to secure funding for the International Planned Parenthood Federation, has been named and branded by Spencer Landor.

Launching on 22 January, it will initially run in the UK, but could extend to other countries, an IPPF spokeswoman says.

Last year US president George Bush reinstated an act which cuts off US aid money from family-planning organisations providing information on, or engaging in, abortion-related activities, action that has cost IPPF $8m (£5.5m) in lost funding.