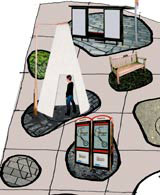 Housed in a new glass-skinned building designed by architect Ian Simpson, The Urbis Museum in Manchester is a museum of the modern city that will open its doors this spring. Inside, four floors of permanent interactive exhibitions focus on the genesis and experience of the modern city. Three design groups, At Large, Land Design Studio and Event Communications have all worked on different exhibitions. Event Communications is designing the Order gallery, which explores the city as a living, fast-growing organism, how it is ordered, and how systems are created to avoid disorder and breakdown. Interactive exhibits look at themes such as self-control and tolerance in public spaces, public order/disorder, and the role of emergency services.

Entry to the main gallery is arranged through a walk-through: a long wall lined with identity cards of people living in cities from all around world. As visitors leave the exhibition, they will be given an opportunity to create their own ID cards.

The first space is The Square, where a series of interactives are housed in the familiar landscape of street furniture. ‘We needed to represent control and order within the public space of the city, and put it across in a 3D format,’ says Gavin Robotham, project designer at Event Communications. ‘Serious content was delivered in quirky ways.’

The results are city ‘cut-outs’ of lamp posts, bus shelters, park benches and phone booths placed on small street islands. Each area contains a narrative. ‘The bus shelter, for example, tells a story about the complexity of transportation in the city. Posters are used to contain text, while a hidden projector shows large-scale images of moving traffic around the world,’ says Robotham. Most of the information graphics uses the language of street signage, including graffiti, while the lighting scheme adapts itself to the natural light outside the building.

The Square leads into Urbis Court, a two-dimensional representation of the diversity of lifestyles within the city. Large photographs of blocks of flats are displayed as wallpaper, while extra information graphics is displayed on 3D items such as welcome mats and letters. ‘The environment here is created by images rather than set work,’ says Robotham. Visitors can eavesdrop on the different lifestyles from the audio installations, which are behind the front doors.

The third exhibition area is entitled Mean Streets, a cinematic reference to the mythological characters that inhabit the urban scape. A wall-mounted graphic montage of posters, book jackets, comic strips and quotations tells stories of gangsters, heroes and villains.

From the Urbis Court, visitors enter the Fear Theatre. ‘The images shown here are a journey through urbanity, taking the spectator through various scenarios of fearful situations. An audio soundtrack complements the effect.’

Another zone, The Edge, focuses on those who have chosen to live in the disorderly areas of the city, from street traders to skateboarders to homeless people. A series of abstract, 3D installations elevated from the ground display audiovisual content, each introducing an individual telling their experience from the edge of the city.

Finally, The Control Zone, designed as a white, sanitised environment, explores the history of surveillance. Interactive displays highlight different technologies of the past and introduce future ones.