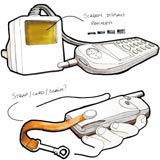 Mobile phone sales may be plummeting, according to electrical retailer Dixon, but handset theft is rising, particularly among children.

A Government report published last week revealed that up to 500 000 young people aged between 11 and 15 had their mobiles stolen last year.

Worryingly, it found that manufacturers have failed to find ways of curbing mobile phone theft.

‘Manufacturers have not, to date, seen anti-theft measures as a selling point, but they should,’ says Design Council policy manager Alison Huxley.

They certainly could do more, agrees Alloy Total Product Design chairman Gus Desbarats. It is an immature market and manufacturers have been racing to meet demand for so long that security has taken a back seat, he says.

There are several explanations for the rise in phone theft among the young.

Consumers believe that bright, brash phones are a target for thieves as they are more covetable. ‘There is almost certainly room for more sober, subtle handsets. At the moment they are too desirable,’ says Desbarats.

But manufacturers are supplying impressionable children with fancy covers that they don’t actually want and overhyping them, he adds.

There is little doubt, however, that the flashier the handset, the more young people will want to be seen out and about with them. And this is part of the problem.

Thieves are opportunistic so one of the best deterrents is not to be noticed on the street with your mobile phone, says Desbarats.

Others disagree. The nature of mobile phones is that they are on display, and the popularity of text messaging among young people compounds this problem. Hiding phones away or dressing them down is not the answer, says Factory Design creative director Adrian Berry.

In fact, the more personalised a phone is, the clearer association it has with an individual and the more ‘difficult’ it is to steal, Grinyer says. ‘A key contributor to phone theft is they are all identical,’ he says.

But more fundamental lifestyle and physical design changes, aside from the colour of the phone, are required from designers and manufacturers to combat theft.

The owner’s name and address, for example, could be permanently incorporated into a phone.

Handset design can be more sophisticated, says Desbarats, combined with more efficient disabling systems. Thieves must know that handsets are virtually unusable once stolen, he says.

‘A proximity sensor kept apart from the phone, which would activate if the two are more than a metre apart, could work,’ Desbarats suggests.

However, the design industry hasn’t dragged its feet over the development of security-conscious phones even if manufacturers have. Central St Martins College of Art and Design, the Design Council and streetwear label Vexed Generation are approaching the problem slightly differently.

Rather than looking at the phones themselves, they are creating a range of fashion bags and wearable mobile phone accessories designed to appeal to young people and prevent theft. Central St Martins senior research fellow Lorraine Gamman is consulting and the Metropolitan Police is advising on the project.

The range, details on which are under wraps, launches in April (See News, page 5).

Last year, the Royal Society of Arts’ 2001 Student Design Awards incorporated a mobile phone security category. Glasgow School of Art student Edward Adamson designed a retractable cord that attaches a phone to its user and a ‘smart charger’ that automatically downloads SIM card memory each time the phone is charged so if your phone is stolen, its information is not lost.

David Crowson from Coventry University designed a fingerprint-activated mechanism that opens the key-pad and VDU, and a remote device that de-activates the phone if it is tampered with.

‘The challenge is to design safer phones that don’t become like Fort Knox,’ adds Grinyer.

The Home Office report even notes this. ‘Solutions need to be practical so that phone users are not discouraged by complex usage procedures. The style-conscious might also baulk at defacing their phones with something as naff as their name and address. Nonetheless, promoting some irremovable form of identification on a phone is a sensible idea,’ it reads.

Social change must occur, too, if mobile theft is to be reduced.

Desbarats says that the psychology of theft is complex and that if you design a mobile with a preventative ‘chain’ or cord, the thief may get frustrated and the consequences could be worse than a lost phone.

Berry, who has worked with manufacturers including Nokia and Motorola, says phones have little value in people’s minds and that is fundamental to how dispensable, therefore stealable, they are.

‘Manufacturers are partly to blame by giving away phones free with certain packages, but people have a blasÃ© attitude towards their phones, leaving them lying around. You wouldn’t leave your wallet unattended on your desk, would you?’ he adds.

Grinyer says the telecoms industry should confront the problem in the same way the car industry addressed security about ten years ago. It needs to take more responsibility and introduce design further up the process, he says.

Royal College of Art rector Professor Sir Christopher Frayling has the last word. ‘Crime is about opportunity. If you remove that, just as the car industry removed it with greater security as a key selling point, you’ve solved the problem,’ he maintains.