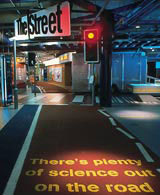 The Thinktank Museum of Science and Discovery opened in autumn 2001 in Birmingham in the Millennium Point, a new building by architect Nicholas Grimshaw & Partners. The museum has been heralded as ‘an environment where science and history can come alive’. There are ten different galleries, some object-based, and all interactive. Exhibition design groups Brennan & Whalley, Richard Fowler Associates, Land Design Studio and Met Studio Design have all created galleries. Technical development of the interactives was by HarrisBlyth. Met Studio designed the contemporary science galleries The Street, Medicine Matters, Things About Me as well as the natural history gallery Wild Life. All four galleries are located on the second level of the building, which can be accessed via escalators. Aimed primarily at a young audience, from fiveto 16-year-olds, the exhibition design work started in 1999. ‘The brief was developed throughout the project,’ says Chris Cawte, managing director at Met Studio, ‘We had a close working relationship with the curatorial team in developing the story line and breaking it down into exhibitions.’

The first gallery to greet visitors is The Street; an exhibition devoted to the inner workings of science in everyday life. ‘While the curators were keen to have the atmosphere to look as street-like as possible we wanted it to be more abstract,’ says Cawte. ‘We struck a balance by choosing key features of a city street and morphing them into exhibitions.’ The result is a series of tableaux held together by a route which visitors have to follow to get into the next exhibition. A red lane to direct circulation and a blue ‘cycle’ lane, alongside Belisha beacons, traffic lights and speed cameras recreate the cityscape. A large-scale train track animated with light and sound, runs overhead.

Unusual exhibition areas include The Food Market, where a greengrocer’s stall is dedicated to plant breeding and natural selection, a vending machine devoted to E numbers and a house structure for genetically modified foods. A park bench beneath a parasol turns into a satellite to illustrate the workings of Global Positioning Systems.

From The Street, visitors enter the Wild Life gallery, which features elements from old Birmingham Museum Gas Hall collection with examples of Victorian taxidermy. Themes such as bird migration, camouflage and hibernation are arranged in colour-coded areas. One large glass display case contains most of the collection, while the floor contains other installations.

Following on is the Medicine Matters gallery dedicated to medical science and dealing with subjects such as surgery, genetics, immunology and public health. The gallery features etched glass screens and commissioned artwork, as well as specially commissioned audiovisual interactive displays. Glass panels set in shotfired steel framework and object-based ‘milestone’ cases jut out from the floating toolkit ‘band’ around the perimeter of the gallery lit from above and below in red. The glass panels are top-lit to enhance their engraved patterns inspired by chemical compounds and to illuminate the front text panels. Pale maple veneer completes the gallery’s clinical look.

Finally, the Things About Me interactive gallery focuses on the human body. A central character, Tam (which is an acronym for Things About Me) is housed in a number of floating spheres containing the chassis monitors and is used as a device for introducing themes. A ‘digestion’ wall displaying a 3D rendering of the inner workings of the human body finishes with a popular ‘poo release button’. Another installation includes a large inflatable lung used as a totem around which an exhibition on how lungs and the diaphragm work is displayed.