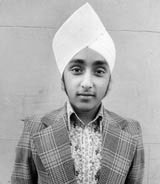 With much aplomb, a magazine with the title Reinventing Britain fell out of my copy of The Guardian the other Saturday. Part of an Arts Council initiative called Decibel, the message of the strapline ‘Cultural diversity up front and on show’ is reinforced by Baljit Balrow’s self-portrait with her face painted in the Union flag.

It’s a potent image and while it recalls Paul Gilroy’s 1987 book, Ain’t No Black In The Union Jack, it seems to open up the possibility (and perhaps necessity) of taking on multiple identities as immigrant or from an immigrant family. As Balrow herself is quoted as saying: ‘My parents see me as Indian, but my friends see me as British. I see myself as both British and Indian.’

It’s an idea that forms the central premise of O2 Changing Faces, and while it’s not a part of the Arts Council’s Decibel, the exhibition sets out to document sec

ondand third-generation British Asian youth over the past 30 years. The show is the collaboration between agency Pres Stop, which first came up with the idea, creative directors MeWe and O2, which is supplying backing and technology for the interactive elements, more of which later.

Pres Stop’s Shazia Nizam explains her motivation for the show. ‘In 2003, Asians in this country are still being seen as either the exotic, the fundamentalist, the repressed or the illiterate. I wanted to show the real lives of young Asian people and how it’s changed over the past three decades,’ she says.

In its most straightforward form, this is achieved through an excellent set of 80 photographs covering Asian life in Britain and featuring the work of such luminaries as John Reardon, Derek Bishton and Brian Homer. In 1979, Homer set up an outdoor photo studio in Handworth, Birmingham, with signs written in Punjabi, Urdu and English and invited residents and passers-by to take a self-portrait and present themselves in anyway they chose. Work looking at present-day peer groups has been commissioned from portrait photographer Suki Dhanda, bringing the show up to date.

MeWe is currently compiling a video with the working title Changing Names that looks at the way that young Asians have mutated and adapted their identities through the adoption of different names depending on the work, family or social context: Jaz or Jaswinder, Indy or Indran and so on.

Through interviews with 18to 30-something secondand third-generation Asians, the promise is to reveal how they acquired their aliases and how that changes people’s reactions to them.

The intention is that, while all the photographic images will be credited, to find out more about a particular picture and the story behind it, viewers will be able to receive additional information through a text message to their phone. ‘The text service allows the public to delve a little bit deeper into certain images and the artists,’ says Nizam. ‘The information will be updated regularly and will include quotes from the photographer, background, anecdotes and images.’

Further to this visitors will be invited to send in their own images via MMS phone, as well as actual prints. ‘We’re children of the technology age and I think this will really appeal to Asian youth,’ says Nizam in anticipation of the show’s opening.

Project managers given even more responsibilties

Real stories behind moves may take a while to report