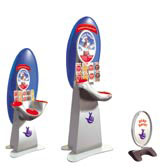 The National Lottery – or Lotto, as we should call it now, post-Billy Connolly – is one of the great paradoxes of public life. It has been remarkably successful over nearly ten years, funding a host of ‘good causes’ and major capital projects, yet people consistently carp at its image.

There have been relaunches and rejigs aplenty, with Landor Associates designing the Lotto identity last year, as well as revitalising the ‘in-store playing experience’ (DW 20 June 2002). The reaction, though, is often a case of damned if you do, damned if you don’t.

Earlier this month, Culture Secretary Tessa Jowell sought to address a perception that some Lotto cash is distributed to unsuitable projects by announcing the latest and most far-reaching lottery shake-up. Her proposals involve giving players more say in how funds are spent and ending Camelot’s monopoly in 2009, to allow competing operators to run different types of game.

‘A public that can’t see how the lottery has benefited it and doesn’t understand how or why grant decisions are made is a public that won’t buy tickets,’ Jowell explained.

She advocates ‘permanent revolution’ in how the institution is run. A statement of intent may be Camelot’s appointment of Nicole Lewis as marketing controller. Formerly at Orange, she started in her newly-created role on Monday, with responsibility for trumpeting those good causes.

The Government also suggests an annual National Lottery Day – focusing on individuals and communities that have benefited from it – and a blue plaque-style marque that would stamp lottery-funded projects and buildings.

But if, as Jowell maintains, the lottery needs to ‘lead, not follow trends’, is this enough? What do experts across the design and branding industry make of this national dilemma?

‘The main problem is that the lottery has failed to build a strong and inclusive relationship with the British public,’ says Wolff Olins board director John Williamson.

‘It appeals to a too small and declining percentage of the population. The slogan “It could be you” was never a strong brand idea, as everyone realises now. Since then the novelty factor has worn off and sales have declined year on year.’

Williamson says the product’s format has been changed too many times, to no avail, and advocates ‘developing a powerful brand idea and expression’.

‘Other brands selling far less exciting products – Tesco, Orange and EasyJet – have managed to build enduring [equity],’ he points out. ‘If Camelot had followed their approach in the first place, the lottery would be growing not declining. Jowell’s proposal [looks positive], but seems to be too little too late.’

‘The lottery has got a bit dull now and a holier-than-thou, good-works focus alone won’t raise the temperature,’ he says. ‘Let the lottery feel like a big lively movement – and heat up an essentially cold thing. It should be a national phenomenon, where we all share in an intense bit of “everyone does it”.

‘Spending every day is what we do best. And people will want to spend on the lottery, not only because it does good. We can handle only so much charity. Sometimes it’s OK just to play. And the lottery is a game, it should feel playful. This isn’t a church. Or an audit. Or existentialism. This is the lottery. It’s OK to want to win. Winning is sexy. Winning a lot is sexy a lot. Embrace the sexiness of money and don’t fig-leaf it. Popular, everyday, playful, sexy. Who can resist?’

‘If lotteries are for us plebs, we certainly don’t want to be reminded of it – which is what this current [branding] does,’ he says. ‘Remove the cheese, drop the worthiness and let each ticket work like a ballot card – fill in your number, but also tick off the charity of your choice. Likewise, each week show us who we’re playing for – ten causes from ten cities – so our gamble also becomes a vote.’

‘More prizes should be offered up and the odds reduced against winning,’ he says. ‘Regional, city or community games could localise winnings, rewards and charitable donations, making them more visible to ticket purchasers.

‘[Or] take the village council approach – where funds are handed over, no questions asked, and local councils allowed to spend it as and when they and the local community wish.’

According to Grasshopper director Liz Cope, herself a former Orange staffer, clearer branding is needed to differentiate the games and broaden their appeal.

‘As the product offering has been extended, confusions seem to have set in,’ she says. ‘A very simple proposition has become complicated to understand and I’m not sure that the majority of consumers can be bothered to pick through the options.

‘If a broader range of games and draws are what some consumers want, this has to be targeted and positioned more effectively. Design and branding could really help here – at present, all instant scratch cards look alike.

‘More strategically, consumers require inspiration as well as permission to play. A much bigger and clearer brand idea that can halo all of the individual games and more aspirational qualities would help broaden the appeal,’ she says.

In the age of Big Brother-style reality TV, it seems that participation has become the name of the game, with stylish, clearly branded offerings winning out. But how this can be squared with the social concerns the Government has raised is the £1m question.

All in a day’s work

Give praise to the church as it fully adopts identity