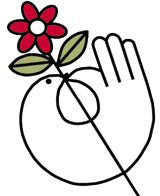 True North is close to revealing identity concepts to propel self-help homeless charity Emmaus – a household name in France – into the limelight in the UK, as it embarks on a rapid expansion plan this year.

Emmaus organises voluntary ‘communities’ of long-term homeless people that combine residential and employment opportunities in one package, with the aim of becoming self-sustaining, autonomous businesses. Originating in France in 1949, the approach has since been adopted in 44 countries worldwide.

The group’s work will cover all the charity’s branding, including signage, literature and website. However, the global logo (pictured) – developed by an Emmaus resident in South America in the 1950s – is sacrosanct.

‘It’s such a strong image [that] it mustn’t be touched,’ says True North director Martin Carr. ‘Apart from that, we’re taking everything apart and starting again to create a new look and feel.’

At the moment Emmaus has nine communities in the UK, with four more due to open this year and a further 16 ‘in the wings’, according to Emmaus UK deputy director Steve Nicol.

The charity, whose president and chief spokesman is Terry Waite and is supported by the likes of Sir Richard Branson, is pledged to having a presence in ‘every significant UK town or city’.

True North was appointed to the project in February.