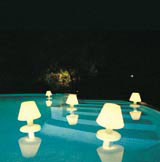 In July 2000, HÃ©ctor Serrano had just left the Royal College of Art’s Design Products course and was doing a few months’ work experience at Ideo under its former head of industrial design, Sam Hecht. The Spanish graduate, then in his mid-20s, had a plan: he would try to stay on at Ideo as long as he could, and if nothing else turned up, he would head back to native Valencia and try to find work there.

But a stroke of luck changed all that. Overnight, SeÃ±or Serrano was ‘the next big thing’, the future Jorge Pensi, and £16 000 richer. His Superpatata lamp, created from a soft rubber balloon filled with sand and a lightbulb, scooped the 2000 Oxo/Peugeot design award, even beating off competition from his RCA tutor, El Ultimo Grito co-founder and fellow Spaniard Roberto Feo. The £16k prize bought him not ‘a car, house deposit or world trip’, but something far more valuable – time.

‘I was so lucky,’ he says, with a Spanish accent that is still distinct, in spite of six years spent living in the UK. ‘Unlike my fellow graduates, I could really focus on which direction I wanted to head, without having to worry about money.’ This is Serrano all over – level-headed, humble and not in a hurry to get anywhere too fast. He honoured his Ideo placement, but then left to set himself up with some basic prototyping equipment and start the freelance life.

With no immediate financial worries, he dug deep into his imagination and started designing. The first piece was Playboy lamp, a clear, Perspex coat hanger incorporating a light, which illuminates any item of clothing hung on it. A broader project followed – Manolo is Gonna Have Fun, in collaboration with Lola Llorca.

Using a fictitious character, Manolo, as the embodiment of the end-user, the collection includes five everyday products with a twist, turning them into objects of fun. Thus, a coffee table doubles as a trampoline and a plate works just as well as a frisbee.

The work earned Serrano critical plaudits – Playboy was exhibited in Milan and at the Victoria & Albert Museum’s Milan in a Van show – but it wasn’t until Serrano’s collaboration with two fellow graduates from Valencia’s ESDI CEU college, Alberto Martinez and Raky Martinez, that he won his first commission. The trio sat down with all their work, and decided ‘which was the most commercially viable’, Serrano explains. It was that simple. They settled on a white terracotta water bottle inspired by traditional Spanish pitchers, which features both a drinking and a pouring spout. It is designed to keep water cool in scorching weather.

‘We had to find a manufacturer,’ Serrano says. ‘I am not a designer-maker, I prefer to put my energy into creating objects.’ They settled on two potential candidates – Habitat and Spanish ceramic and glass company La Mediterranea. Habitat never interviewed them, but the latter was interested. The bottle, La Siesta, is still being made. ‘Most people don’t use it, they’re afraid to break it,’ Serrano says. ‘It’s more of an icon piece now.’

NetObjects, a collaboration with another Valencia graduate, Victor ViÃ±a, takes Serrano in a different direction. Unveiled at Designersblock in Milan, it is a touring exhibition based on the Web. Everyday situations – finding a partner, checking your share prices or the weather forecast – are represented by a series of icons linked to websites. Such ephemeral projects seem to be appearing in product designers’ portfolio with increasingly regularity, such as Onkar Singh Kular’s Truth TV project based on human psychology (DW 26 February). Are they natural habitats for a generation that has grown up with technology?

More commissions followed for Serrano, including the Top Secret lamp for Metalarte – a bundle of polyester film strips that have been passed through a shredder to create a lamp that looks like a glowing wad of candyfloss. Serrano’s most recent lamp for Metalarte is Waterproof, which was selected for the V&A’s Brilliant! exhibition. The floating light resembles a traditional table lamp, and is designed to bob about in swimming pools. ‘I wanted to create an object to do with water and light,’ Serrano explains. ‘So I went shopping. I found some tubular lifebuoy lights in a nautical store, which only light up when you turn them upside down.’ Hanging in Serrano’s east London studio is the first mock-up – an inverted light with a lampshade taped to it. It took him a month and a half to create, and it was a further year before a functioning prototype emerged.

It is this use of low-tech, everyday materials and objects, and his willingness to experiment, that typify Serrano’s design approach. Much of his inspiration comes from children’s toys, including Superpatata. ‘The idea for that came from a toy, basically a balloon filled with flour. I’m interested in rational, functional objects, and try to keep my work as honest as possible,’ he notes. ‘The mock-up is the most interesting part, I’m much less interested in the following stages.’ Serrano has been called a highly interactive designer, but he denies this, saying what he’s after from people is ‘a reaction’ to his products.

So, he’s 29, settled in London with his girlfriend and starting to find success. No longer the ‘next big thing’, he’s also not a big name, yet. So what is he? A rising star? ‘I’m still at the beginning,’ he says. ‘The press often make you out to be more established than you really are, particularly in Britain, where the idea of a “star” in any discipline is much more prevalent. In Spain, it takes longer to become known. You reach a certain level from the quality of your work and you stay there. Just because you’re on the cover of a magazine, doesn’t make you a good designer. But I’m getting more commercial work, and I’m making a living from design rather than teaching [he now teaches just one day a week, at Ravensbourne College of Design and Communication], so I’m happy.’

Wise words from someone just shy of his 30th birthday. A savvy, witty designer, Serrano strives for balance in everything he does. He won’t say what he’s working on next, adding it’s probably embargoed. But he will tell me what he’s up to this afternoon – he’s taking time off to show his mum round London. My point is proven.

Become the brand to add value to guest experience