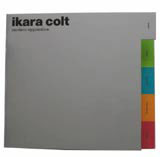 PralinÃ© has created the sleeve design for Ikara Colt’s latest album, entitled Modern Apprentice. The booklet uses a minimal, colour-coded system to present information about the band as well as the record.

‘Ikara Colt are an interesting band in terms of ideas and I talked to them a lot about the design of the album,’ says PralinÃ© founder David Tanguy.

‘We didn’t want a subjective visual on the cover; we used a dry and typographic style to classify information,’ Tanguy explains.

The spare design of the 32- page booklet is intended to ‘put some distance’ between the heaviness of the music and the appearance of the record, according to Tanguy.

‘I looked at the usual content of record covers, researched minimalism, then classified that content with six colours.’

PralinÃ© also designed the cover for the group’s first record, Chat & Business, and the consultancy was subsequently appointed by Ikara Colt’s record company, Fantastic Plastic, to create artwork for other bands on the label.

Become the brand to add value to guest experience