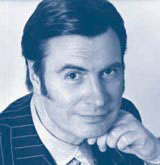 ‘Fox-hunting; a touchstone to ignite the strongest feelings in a schizophrenic Government; a national pageant as redolently ancient and photographic as any Buckingham Palace guardsmen; or a ready-made soapbox topic venting spleen in allegiance to small, furry animals. Support halal butchers, castigate a rural way of life. Yet for export value? Fifty years of pictorial placemats can’t be bad business.’

‘Chicken tikka masala. However, like all rounded cultures, we should have an eclectic selection of icons that celebrates the breadth of English culture – Pimms, bangers and mash, dickie-bow ties and, of course, that icon of the true English gent, Terry Thomas: “Ding-dong!”‘

‘When abroad I often note a fascination for our sense of humour. Spike Milligan represents inventive, irreverent humour, tinged with crazed absurdity; over-confident, yet perversely self-deprecating. In reality, though, the icon that really endures abroad is Monty Python, but they’d nominate Spike too, surely?’

‘Heathrow is still the world’s busiest airport, so I guess one of our greatest cultural icons should be the airport waiting lounge, ugh.’

‘It’s hard to separate wishful thinking from reality – we share with most countries the problem of the world-at-large’s fond recognition of ancient rather than modern things. Someone who embodies both, with a sense of irony that could only be bred in these isles, genteel and rude at the same time, is Vivienne Westwood.’

Glasgow School of Art sets an example for academia