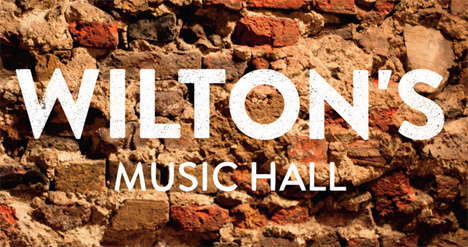 Wilton’s Music Hall in London is being rebranded by N1 Creative in a pro-bono project ahead of planned conservation work at the venue.

The consultancy last year relocated to a Whitechapel street near Wilton’s. It approached the music hall – which claims to be the oldest in the world – and offered to design a new brand which could ’articulate the artistic distinction’ of the venue, according to N1 managing director Jacky O’Leary.

’First, we had to get them to define what Wilton’s vision is,’ says O’Leary, who says the new identity balances Wilton’s history with its creative vision and fundraising activity.

The new brand ’draws on the history of the building without looking too vintage’, according to N1 designer Aggie Bainbridge, who says design details have been drawn from the Wilton’s building.

Referencing the texture of the building’s crumbling walls, N1 has applied a weathered look to a letterpress-effect logo, alluding to old music hall posters.

’The walls have an orangey feel with decaying plaster over red exposed brick,’ says Bainbridge, who has used these hues to inform the colour palette, which takes in teal, red, orange and light blue.

A tweaked Brandon Grotesque font has been used for the main identity and Rockwell Extra Bold and Bebas Neue will be used as secondary fonts.

The consultancy is also developing a website, which will be photography-led and easy to use and maintain, according to Bainbridge, who says, ’We want to show the grandeur of the building; it’s beautiful in there and we need to get that out to people.’

Application of the new brand is still being finalised, but N1 expects it to start rolling out from April over a six-month period.

This will cover in-house promotions, external event collateral and more formal fundraising applications before the building’s signage is overhauled.

All of Us and Dixon Baxi create Russian TV channel