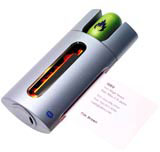 Ideo has looked at the future of the business card and how it could become rather more than a piece of paper with printed information. Designer Steve Heron took current notions of the function of a business card as the departure point. ‘There was the question of what happens when you give a card to someone? That card is no longer yours, it becomes the possession of someone else and we were interested in the life of the card and its subsequent journey. There is also the matter that what you don’t say on a business card can say as much about you as what you do,’ says Heron.

Three possible ways of creating an identity were proposed by Ideo’s London team, each dependent on the context in which a card is likely to be given. The first is a business card that captures a moment and its associations, jogging the recipient’s memory when they come to look at the card again. Featuring extensible bellows that act as a pinhole camera and create a permanent image, the card fuses the donor with a particular set of circumstances.

To give identity to individuals within a community, Ideo proposed an electronic business card with the capacity to retain information about individuals and to create matrices linking those with particular shared associations or qualities. The intention was to mimic the organisation of a file of business cards – a normal response to dealing with large amounts of information.

Finally, the question of identity and security was addressed by designing a business card with the capacity to carry an individual’s DNA. However, to reassure those people that might have misgivings about handing details of their genetic blueprint to someone else, the card would only carry neutral contact details until the seal that contained it was broken and a DNA print was imparted by the donor.

In design terms then, this was an exercise in looking at and constructing a possible future. It was also a consideration of the nature of identity and the use of business cards to deliver context-sensitive information.