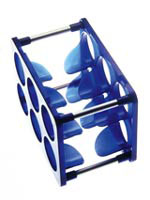 Jasper Morrison wonders if I’ll think he’s going a bit PostModern. He gets up, rummages in a corner of his studio, and returns with a pre-production prototype of his hanging bird-table for Magis. It consists of two simple plates of plastic – one a feeding tray, the other a protective roof-fixed to a central metal rod. At the top the rod forms a hook, like a coat hanger – you could hang it on a tree. At the bottom is just a spike – you could stick it in the ground. The plastic discs, he points out, have a woodgrain texture moulded into them.

Apparently, he had to fight quite hard with the manufacturer to get this texture. He found the pattern on a packet of cheese and scanned it into a computer, then played about with it. Subtle though it is when reduced to an almost imperceptible surface finish, it seems uncharacteristic, somehow.

Morrison is Mr Restraint. He reduces things to essentials. He designs things that are so quietly functional that, to an untutored eye, can look as if nobody designed them at all. This is the role he has carved out for himself since he first emerged on the design scene in the mid-1980s. Morrison is an antidote to excess. He does not do decoration or ornament.

So, then, wood-grained plastic – is this the thin end of the wedge? He seems, in his quiet way, gleeful about it. What next from Morrison – overstuffed Chesterfield sofas upholstered in pink zebra-stripes? Well, of course not. But there is still the little matter of the Prime Minister of Tamil Nadu to consider.

I do not know who the Prime Minister of Tamil Nadu is, or was. All I know is that a startling image of him appears in the midst of Morrison’s celebrated silent lecture and picture book, A World Without Words. Which is known, in that reduced Morrison way, as AWWW.

AWWW first appeared in 1988, his response to an invitation to lecture. That way, he didn’t have to talk about himself, which is an activity he doesn’t particularly enjoy. He had collected all the images – which are of objects that inspired him – in the six months after he finally left the Royal College of Art in 1985, by which time he already had several items in production. It is an eclectic collection of 130-or-so images, ranging from an Yves Klein “anthropometric” female body-print to the 1950s architecture of Rome Termini Central Station.

AWWW is now being revived – remastered in digital form, running for 18 minutes – at the Design Museum in London. Morrison’s studio is making a little cinema booth on the top floor to show it. He has been doing a bit of lighthousekeeping on AWWW – weeding out images he feels aren’t so strong or don’t make good pairings with others, planting a few new ones such as an ancient Greek bronze duck or a somewhat humanoid 19th century American hayfork. But the Prime Minister of Tamil Nadu is still in there.

He cuts a jaunty figure, this PM, hand on hip in a kind of scarlet-and-gold tuxedo, complete with co-ordinated eye-searing tie, sunglasses like early TV screens, pencil moustache, lips painted to match the tux. Topping the whole ensemble is a white woollen fez, set at a rakish angle. He is set against a background of bright blue sky with fleecy clouds. That’s the Prime Minister of Tamil Nadu. The style is that of a Mumbai (previously known as Bombay) cinema poster, without the lettering. You can’t quite work out what he’s got to do with Morrison’s work. Why is he there?

“Well,” starts Morrison, and then pauses for a long, long time. “He’s a clear example of something,” he offers wryly. We look at the picture in the book for a while. “It’s an image that carries some weight,” he adds, almost inaudibly. Another very long pause. Then he throws in the towel. “I suppose all of the images were chosen on the spur of the moment. It wasn’t as if they were qualified by any particular criterion. It was more a case of – that’ll do, that’ll do. And then pairing them up.”

The Prime Minister of Tamil Nadu is not quite alone in speaking of another, “un-Morrisonian”, world. You see plenty of things that fit the austere “Jasperish” image – tall timber fishermen’s huts on the beach at Hastings, an Eames plywood leg-splint, American grain silos, Jean ProuvÃ© chairs and so forth. And then you see Gala Dali’s egg-shaped boudoir, or a matador in full regalia, or circus performers, or a Danish postman in immaculate brass-buttoned scarlet uniform. Then there are the slyly or overtly erotic images, culled from Indian sculpture, Carlo Mollino photographs, Italian sugar packets, wherever. Furniture design – which is what Morrison trained in – is after all entirely to do with the body.

Some of these things – particularly the furniture and architectural details – have a direct bearing on Morrison’s subsequent work. A photograph of three ordinary wine bottles in a row translates directly through to an early designed product of 1988, named with disarming directness “Three green bottles which could also be clear”. That attitude, you could call it anti-obfuscatory, also informed his famous 1988 plywood furniture range, “Some new items for the house”. No fancy “Starckian” names. Just a description with an old-world courtliness about it. Go back to AWWW and you’ll find endless functionalist furniture, particularly by Enzo Mari, informing those designs.

Morrison may occasionally apply a woodgrain finish to a plastic object out of a sense of slight devilment, but what AWWW tells you is that he set up his stall in the 1980s, decided what he was going to do, and then quietly carried on doing it. His work then had an astringent quality – it was the grapefruit sorbet that cleansed the palate of greasy “PoMo” deposits. When he started, the fashion was the way over-the-top style called Memphis. His style was so different, so resolutely non-signature, so un-look-at-me, that everybody looked. Actually, he did give his approach a name, too, at first: Utilism. These days, the name Morrison is enough. Everyone knows what it stands for. And no, he says, he still does not have his signature displayed on any product.

“Memphis was a lucky break for me because it was so different from anything I would ever have wanted to do,” he says. “It was a natural thing to react against. I could only do what I do anyway – it was just fortunate for me that it was such a juicy opposite. That whole period was really so overdone. So it was my good luck that what I was doing was seen as refreshing. If there’d already been ten years of that sort of thing, I’d have been in trouble.”

The studio in London, on the top floor of a Clerkenwell converted factory complex stuffed with architecture, design and media types, is big, light and very spacious. It’s roughly divided into three: a slightly messy “workshop” and kitchen bit (Morrison sighs resignedly on finding there is no milk to put in the tea). The main studio section is where the staff – four or six of them, depending on circumstances – sit at computers placed on beefy timber tables, and then Morrison’s own office is at one end. The spaces flow into each other, with storage forming the divisions. Music plays – today it has a mid-1970s bluesy feel to it. Morrison is dressed in scruffy light trousers and a zip-up black top and smokes an unfamiliar brand of cigarettes that looks as if it was picked up on a trip somewhere, probably for the sake of the packaging graphics.

We sit on his Magis gas-injection plastic chairs – prototypes for additions to the range are scattered around. As is a collection of toasters – Morrison’s moving into electrical goods. He’s also designing a bicycle – his second-ever vehicle, after the trams for Hanover. A utility car project was in the offing for a while, but went away again. The clients for these new projects cannot be named. Morrison recounts all this dispassionately. It seems that, for him, no one project is any more or less important than another. But there is one thing he likes doing above anything else: designing for mass production. He’s a designer, not a craftsman, he says. One-off commissions are of little interest. Chairs popping off a production line every three seconds are much more like it.

He’s teaching again now, at the RCA. Now that furniture and product design are treated as one discipline at the RCA, he’s a lot happier. And besides, Ron Arad asked him. That’s who he shared the inaugural and somewhat damp-squibbish Perrier-JouÃ«t Design Prize with. He can’t find much to say about that prize, but he shows me the trophy: a big hinged wooden box with a giant fake bottle of champagne in it, on a plinth. He raises an eyebrow eloquently, and drops the hideous object back in the box. There’s nothing more to say, really.

Morrison is Morrison: so understated as to be almost silent. The Prime Minister of Tamil Nadu is not going to take over. A World Without Words is as relevant today as ever. So – is he going to continue returning to it, tinkering with it ever so slightly, taking out “X” and putting in “Y”? The response is pure Morrison. “It depends how many new formats emerge. If digital formats survive, this may be the end of the line. Having said that, it’s very easy to make changes now” he says.

A World Without Words is at the Design Museum, 28 Shad Thames, London SE1 until 30 June