From thick woollen Victorian-era jerseys, to the ultra-modern polyester strips of today, football shirts have undergone a considerable image change over time. But the evolution of the garment goes far deeper than developments in just cut and cloth.

The National Football Museum’s newest exhibition, Strip! How Football Got Shirty, charts the evolution not only of the football shirt itself, but also of the culture surrounding it. Once just a practical piece of kit, the exhibition – which is being launched as part of Design Manchester – explores how football shirts have been transformed into cultural signposts, canvases for high fashion and in many cases, genuine collectors’ items.

Strip! has been curated by the National Football Museum’s Jon Sutton and has been designed inhouse. The so-called “line-up” for exhibition comprises six sections, taking visitors through history, the influence of replicas, sponsors and fashion, the rise of shirt technology and beyond.

And just as the exhibition states the influence of design on football shirts, the shirts themselves are used as inspiration for the space’s 3D design. Large-scale replicas of well-known designs adorn the walls and seating – on one wall visitors will see the iconic West German 1988-91 geometric stripe, on another the 2019-20 green zebra stripe of Forest Green Rovers, meanwhile benches are plastered with Stockport County’s 1993-94 away shirt zigzag. 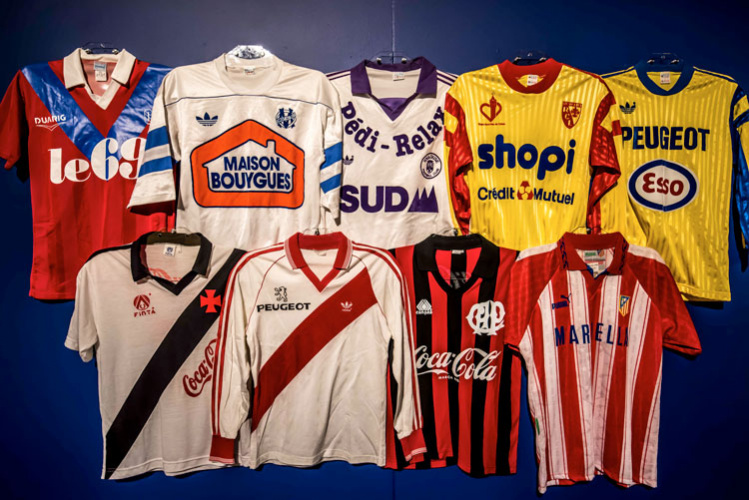 “Taking the tribalism out of it”

The exhibition begins with a chronological retelling of the football shirt’s history, though Sutton points out that for the first century of the garment’s existence, very little changed in terms of design.

“We’ve shown the first hundred years through six shirts,” he says. “Because there really wasn’t a lot of variance – we have a shirt from 1900, and there really isn’t a lot of difference between that and the one we have from 1948.” 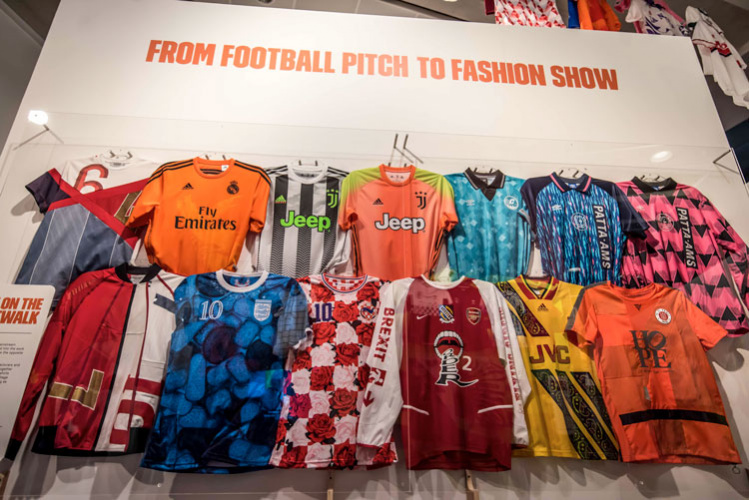 “Not a million miles off an exhibition”

According to Sutton, the idea for Strip! had been in the pipeline for some time. “We’ve displayed football shirts as an organisation for 20 years, but never on this scale,” he says.

The starting point for the curation came from the Museum’s own collection. The team were also aided by author, illustrator and football shirt expert John Devlin, whose book True Colours Sutton labels the “bible of the exhibition”.

After going through the pieces available to them, Sutton says they realised they weren’t “a million miles off an exhibition,” though some of the “obvious ones” were missing. But he qualifies this by saying he also didn’t want the exhibition to only stick to the “obvious ones”.

“If you look at our top 20, there are some shirts that people will be surprised by, and the same goes for our Hall of Shame,” says Sutton. 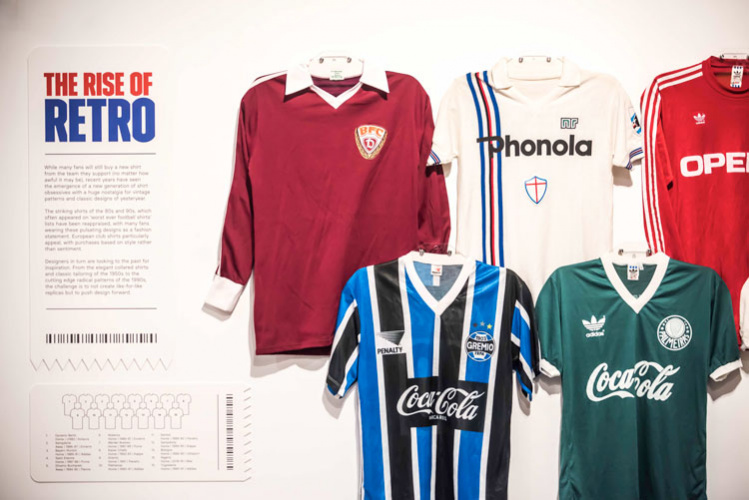 “Designing for the future”

The narrative throughout the exhibition is clear – hitting all the major points that have worked to create the football shirts we see today. It marks the replica boom of the 1970s, the polyester revolution of the 1980s, through to the bold and eccentric designs of the post-Italia 1990 footballing world.

When it comes to present day, however, Sutton says one of the biggest influences will be environmental impact of football shirts. With this in mind, a bespoke shirt has been commissioned for the exhibition from Manchester-based artist Stanley Chow, which is made by manufacturers PlayerLayer with a 50% sustainable bamboo material.

“It’s a problem for the fashion industry to tackle as a whole, but it’s important for us to be part of the solution and not part of the problem,” says Sutton. 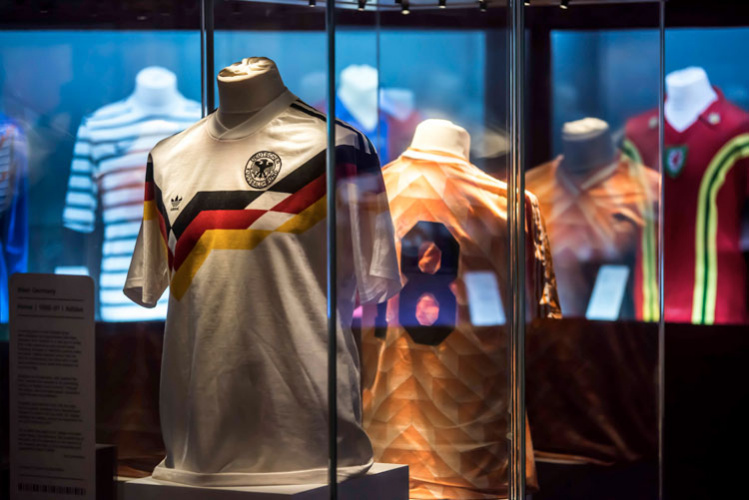 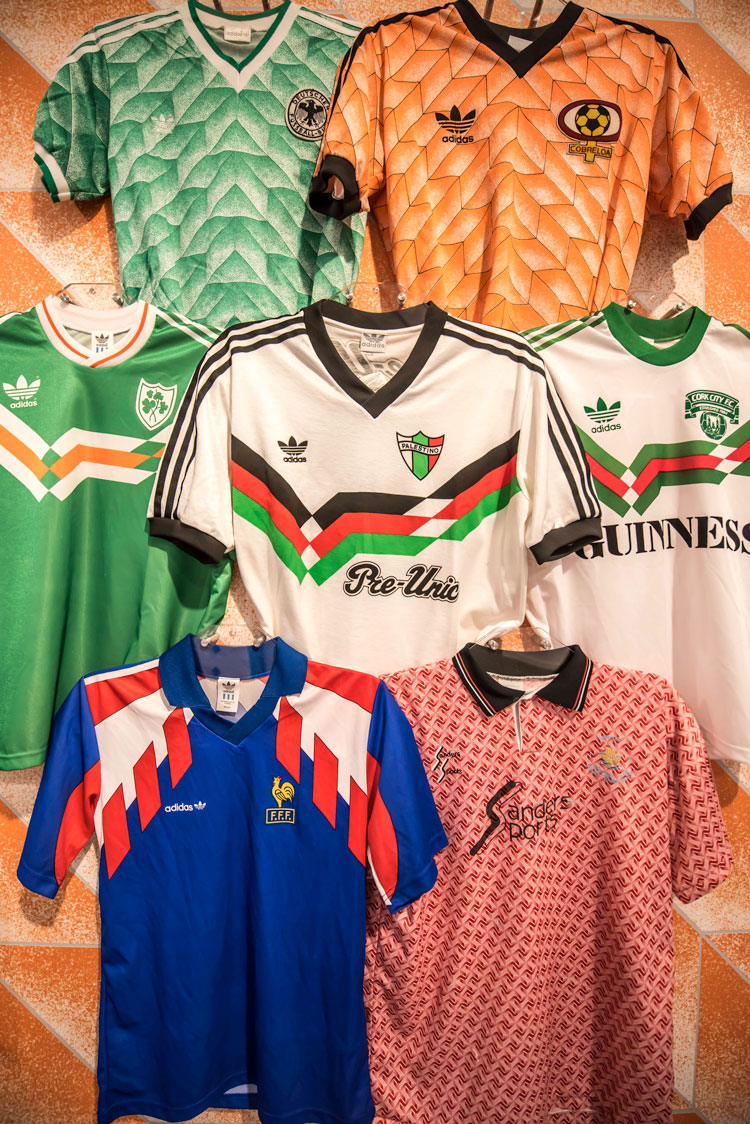 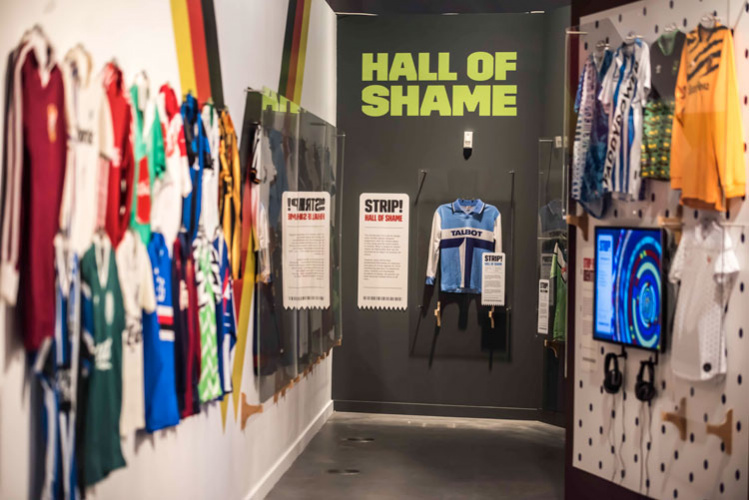 How a new generation of designers is creating social impact