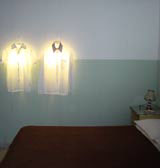 Tourism may be at a bit of a low ebb, but we’re still seeing a flurry of interest in ‘design’ hotels. It used to be cool a few years back to stay in New York’s Philippe Starck-designed Paramount or Royalton. But now there’s a much wider choice, not least in the UK with London’s Sanderson and St Martin’s Lane hotels (also by Starck, with Harper Mackay), and Hempel and One Aldwych, with involvement by Jestico & Whiles, and the growing Malmaison chain. It’s not surprising, therefore, that last week’s Milan Furniture Fair should boast two conceptual projects based on hotel design. In the one, GrandHotelSalone, the fair’s organiser Cosmit asked ten top architects and designers each to create a hotel room for a different capital city; in the other Dutch experimental group Droog Design took over a Milanese one-star hotel and wove its magic by making subtle interventions in a series of otherwise mundane rooms.

Cosmit’s installation, curated by Adam D Tihany and at the Milan fairground, was about the best thing at the show. An intriguing exercise, it provided a great talking point, though there appeared to be a mismatch between some of the designs and their intended cities. Had some of the participants merely pulled out one that they had prepared earlier?

‘I like that. It’s pure New York,’ said one flamboyant US visitor as he walked into the mock-up for London created by Vico Magistretti and Flou with its attempt at ‘cosy familiarity’. Arata Isozaki’s design for Rome, meanwhile, was so Japanese it would make a great set for Madame Butterfly. Not much Italian influence here.

Other contributors included French architect Jean Nouvel and US great Richard Meier. But stars of the show were Gaetano Pesce, whose eclectic room for Moscow – ‘capital of a country in transition’ – featured stunning ‘stained glass’ faces for doors, and Matteo Thun, whose minimal Hong Kong design was more a shrine than a room, with floor to ceiling bamboo walls, ‘temple’ sounds and incense. Then there was Zaha Hadid’s angular white leather design for Sydney, with integrated bed and bath. These three dared to have fun.

Droog’s hotel, meanwhile, was all fun. A quirky object had been introduced to each room, ranging from HÃ©ctor Serrano’s Clothes Hanger Lamp – a shirt hung over a simple lightfitting – to Matjis Korpershoek’s Blanco Jigsaw – shapes without images – and Nina Farkache’s Marble Room, its floor strewn with glass marbles that you had to negotiate by shuffling on a cushion to the bed.

Visitors could buy a limited edition ‘passport’ to the hotel and stamp it with images of the artefacts they’d seen. The stamps were those fantastic mechanical Dutch models that are so satisfying to use, emitting a resounding ‘clunk’ as you press down on them.

Both installations were interesting, but in terms of inspiration Droog’s ever-challenging inventiveness won hands down. A real Dutch treat.