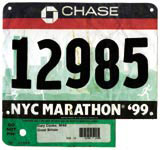 In 1999, I was cajoled into running the New York Marathon. I’d reluctantly taken up running to keep the middle-aged spread at bay. The furthest distance I’d run was three miles. I had three months to train. I bought a book called How to Run a Four-Hour Marathon in Four Months. I started on month two. It was a steep learning curve.

I discovered during training that the further I ran, the more euphoric I became. I ran to music, middle-of-the-road stuff like Eye of the Tiger and Simply the Best – music I’d never admit to liking in company, and yet it inspired me and I felt fantastic.

As those endorphins flooded through me, I conjured up an endless stream of solutions to design briefs, solutions to the problems of the world and multi-million pound money-making schemes.

I ran my first marathon in under four hours. This inspired me to run more. Last year I ran the London, Chicago and New York marathons. Running is my meditation, it helps clear my mind and focus my thoughts. Who said it was boring?

Vibrandt cream of the crop with friendly dairy range

Too little, too late for Waterways development

Johnson Banks to draw up the Art Fund rebranding